Express To Spot The Difference

Anyone wondering what the recent staff cuts at Express Newspapers would mean for the already rock bottom quality of the product did not have long to wait, as the front page of today’s Express shows. Not content with recycling other papers’ day-old stories and culling snippets from websites, the Desmond press is now recycling its own front page headlines. 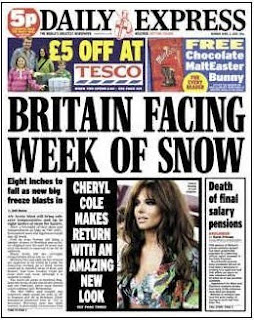 Where did I see that one before?

So readers may get a sense of déjà vu when seeing “Britain Facing Week Of Snow” today, although the story is not by usual Weather Shock Horror pundit Nathan Rao, but instead has the by-line of Anil Dawar. It’s the usual exaggeration: that the wind turning to the North in early April could bring snow to higher ground is not new news, but a fact of life. 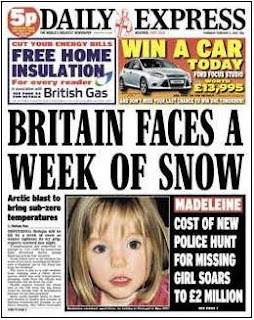 And we were here exactly two months ago: on February 2 came “Britain Faces A Week Of Snow”, which was if anything more of an exaggeration, as there wasn’t much of it, and it didn’t arrive until two days after the headline. Plus, to no surprise, what arrived didn’t last even part of a week, well, certainly not in this part of the country. So there you have it.

Less hacks to churn out the cheap and nasty copy means it gets even cheaper and nastier, although Des gets to keep trousering his suitably generous wedge. And we all know what that means – another Benchmark Of Excellence!

"Fewer hacks" would be less wrong.