Zelo Street does not have a problem with difficult subjects – like finding a way through the fog of misinformation about limited companies – but it’s always good to have folks make such glaringly simple howlers that they can be put on the kebab and done to a turn without needing much in the way of elaboration. And that takes us back to the arguments over the Mayoral campaign in London.

Still flailing around against his own party’s candidate, supposedly Labour member Dan Hodges has presented a superb example of those simple howlers over the holiday weekend as he has gone into battle on Twitter to try and persuade folks that Ken Livingstone is some kind of monstrous ogre of a politician. In pursuit of trying to prove this, he has had to face more than one way. 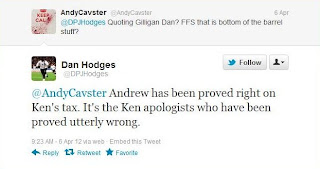 His first problem is calling Ken out for dishonesty, which causes him problems at the outset: in support of his contention, he rests heavily on the output of Andrew Gilligan – no, don’t laugh – who has cornered the market in journalistic peddling of the very dodgiest motahs. But Hodges has such faith in Gilligan that he is no longer called by his surname, but the much more familiar “Andrew”. Bless! 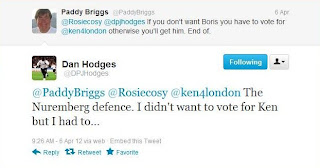 And Hodges’ new bestest friend “Andrew” has “been proved right”. Of course he has. Like saying there was an equivalence between paying Corporation Tax and top rate Income Tax (those wanting an example of limited company profits, taking them as dividends, and the tax rates applicable could do worse than this piece in City AM, not known as a Livingstone supporting paper).

On top of siding with someone else – Gilligan – who is out to damage Labour by any means he can, Hodges is up for attacking anyone voting for Livingstone because he’s the Labour candidate with the Nazi smear of “Nuremberg Defence”. Then he kicks Livingstone for comparing people to Nazis. Although it’s OK for those who pretend to support Labour but want to damage it. But Nazi smears are sometimes A Very Bad Thing

And he isn’t done yet: the discussion of the candidates’ tax affairs is, in the retelling, one that Livingstone started. Of course he didn’t – Gilligan did – but Hodges’ memory might have failed him. Or perhaps he’s confusing Livingstone talking about Bozza’s second job at the Telegraph. But he is going to tell anyone who is interested how he will be voting come next month.

Confused of Somewhere in London writes

You got that right: he refuses to vote for his party’s candidate, but will be voting. So this Labour Party member is going to vote for another party, and by telling readers of Telegraph Blogs will effectively be campaigning against Labour – and deliberately so. Yet if the party chucks him out, I’ll hear the whingeing even in a location 158 miles from Euston. 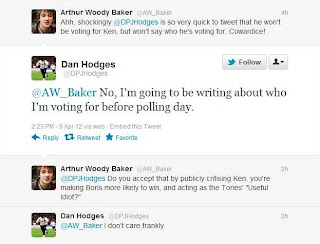 All because the party won’t do his bidding. The word “selfish” doesn’t do him justice.