Outside, it has been showers or steady rain for the last few days. So it often is in April, but it is also not as mild as one might expect, and so the weather and climate punditerati, always on a hair trigger nowadays, has gone off at half-cock at the first sign of a forecast suggesting that next month could be cold, maybe even colder than May 1996, which followed a cold and grey April.

And at the Express, that means another outing for Nathan Rao, forecast recycler par excellence, whose endeavour has seen him promoted to the front page lead on today’s paper (although it has to be stressed that being on the Express’ front page nowadays requires little more than the ability to creatively churn over a press release or a handful of quotes from an approved talking head). 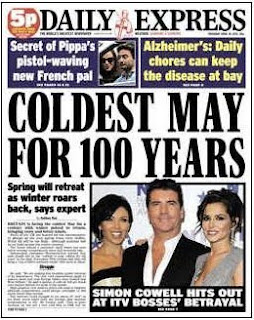 “Coldest May For 100 Years” is the headline, with the follow-up assertion that “Spring will retreat as Winter roars back, says expert”. Ah, there is an “expert” involved. So, now that Positive Weather Solutions has been exposed as little more than a sham, whose “expertise” is the name in the Express frame? It must at the very least be someone prepared to do free headlines and summaries.

Step forward our old friend Piers Corbyn of Weather Action, who put out an apocalyptic frightener on Tuesday, saying “The coldest or near coldest May for 100 years in Central and East [sic] parts with a record run of bitter Northerly winds. Snow at times especially on high ground in NE/East. Spring put in reverse”. There was an 80% confidence in this outcome, and 90% for “within 5 coldest for 100 years”.

For the full forecast you have to subscribe – which means paying money – but the Express doesn’t need that, as Rao has quite enough with Corbyn’s headline and a few quotes from the Met Office – who are rather more equivocal – to pad out his copy. But, as Zelo Street regulars will know, relying on Piers Corbyn is not always such A Good Thing.

Corbyn made an awful lot of capital out of getting the December 2010 cold snap right, but as I pointed out at the time, this had already started in late November, and a “winter high” pressure can often be stubborn and slow moving, so it wasn’t such a difficult call. He said the cold snap would return after the New Year, but it didn’t. And the Winter overall wasn’t the coldest for 100 years, but the 15th coldest.

And Corbyn has other form when it comes to getting it wrong. But there is clearly nothing else that the Express can rustle up for next to nothing to fill the front page, so his climatic scare story gets the nod. What will the weather actually be like? Put directly, we can’t tell that far in advance. Anyone pretending we can is a fraud.

But it frightens enough punters into buying the Express, and it costs next to nothing, and we know what that means: another Benchmark Of Excellence.

[UPDATE 21 April 2015 hours: wait a moment, Express readers, it won't be snowing after all - Nathan Rao got another front page today (Saturday) to tell the faithful that "Now We Face A Month Of Rain". This is backed up by very little, except that there were flood warnings yesterday, but obviously not for a month ahead.

One priceless line is "In York, the River Ouse burst its banks yesterday ... forcing commuters in the city centre to wade through water to get to work". Very good Nathan, when the Ouse overflows in York, unless it's really bad - and having worked in the city I have prior experience of this - there isn't any work location that you have to wade through water to get to.

Piers seems to exist in a world where he is never called on those he gets wrong. The more predictions he makes the more likely he is to be right. Perhaps that's why he's now getting in on the volcano and earthquake prediction gig too