The Rise Of The UK PFJ

The latest opinion poll numbers have been taxing a range of right leaning commentators, and for one reason: some of the latest surveys of voting intentions show UKIP overtaking the Lib Dems and therefore occupying third place. Moreover, the party lead by Nigel “Thirsty” Farage is scoring even better with pensioners, who are thought more likely to turn out and vote.

And so a sudden realisation has overtaken many in and around the Tory Party. These UKIP chaps could split the right of centre vote! Nowt gets past this lot, does it? Those UKIP chaps already did that at the last General Election: in 21 seats across the country, the winning Labour majority was less than the number of votes polled by UKIP. 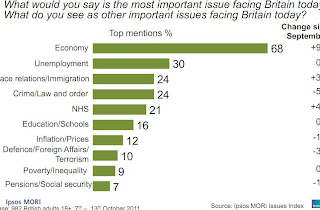 Thus there have been calls for UKIP and the Tories to consider some kind of merger, not least from occasional Tory and MEP Dan, Dan The Oratory Man, who has tried to draw a parallel between the UK and Canada, where a merger has brought together the former Progressive Conservative and Reform Parties. But, as with usual with Hannan, there is more to it than that.

Because, as he concedes, the issue that caused the launch of parties like UKIP, and has split the Tories more or less since the passing of the Maastricht Treaty in 1992, has been the relationship between the UK and the EU. The nearest thing the Canadians have to that is the North American Free Trade Association (NAFTA), which is not the same kind of beast at all. 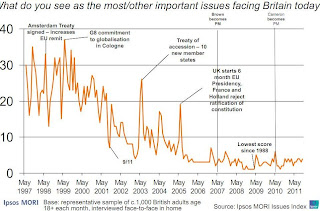 Moreover, no party in Canada is urging an exit from NAFTA. Exit from the EU, though, is still the main driver behind UKIP. But here there is a problem: those same opinion surveys that show UKIP improving also have shown that the public do not consider Europe to be such an important issue. The economy inevitably comes top, with unemployment second.

Sure, race relations and immigration comes high up the list, but pinning that on the EU is stretching matters. The UK had significant immigration from the Commonwealth for around a quarter of a century before accession to the then EEC, and had been a haven for those fleeing less tolerant regimes across the world for centuries before that.

No, what voters see in UKIP is not only a vote on the EU, but also one for more defence spending (pointless), a more authoritarian law and order policy (ruinously expensive and equally pointless), joining the flat earthers over climate change (not clever) and otherwise seeking the return of that mythical 1950s utopia beloved of the Daily Mail and which never existed in the first place.

And that is a circle that the Tories can never square. Not even with Dan’s help.