There has still been no arrest in the case of unarmed black teenager Trayvon Martin, shot dead by self-appointed neighbourhood watch vigilante George Zimmerman in Sanford, Florida. But there has been no shortage of media coverage, and indeed, media involvement, with the latest twist concerning a prime time host at Fox News Channel (fair and balanced my arse). 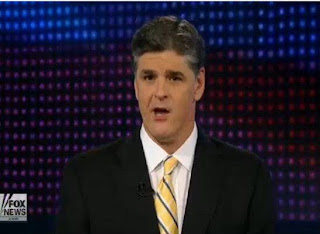 As I discussed in an earlier post, Zimmerman had tracked Martin, even though he had been told not to by the emergency operator, and it now appears that the argument in defence of the former – that he was merely acting in self-defence having been injured by Martin’s aggression – is not borne out by the evidence. Zimmerman has been shown to be uninjured following the incident.

This has not stopped the whole array of hosts at Fox from going in with both feet, the pretence being that they are only trying to find out what really happened, and think that Zimmerman’s side of the story is not being put fairly by the rest of the rotten and biased, left-leaning, and of course liberal media. There have been attempts to smear Martin on the basis of school expulsions and alleged drug use.

None of this, of course, makes shooting someone dead any more legitimate, and on top of this has come the news that professional loudmouth Sean Hannity, who fronts the 9pm ET weekday slot on Fox, had been in contact with the shooter. Zimmerman contacted Hannity, apparently directly, spoke to him, and then declined to tell his increasingly exasperated legal team what was said.

Equally bizarrely, Zimmerman confirmed his contact with Hannity in an email exchange with Loop 21’s Wesley Lowery, telling him on Monday last “you can contact Sean Hannity I spoke with him today”. Not surprisingly, Fox and Hannity have proved most reluctant to answer enquiries, so whether the host secured an interview with Zimmerman is not known.

But for the shooter to talk to a cable news host directly – and one that has been prepared to argue his corner against all accusations – and do so without telling his lawyers, or letting them know what was said, is truly strange. Hannity should as a priority say what he knows and, most importantly, not use any of that knowledge in a way that might prejudice any future legal action.

In the meantime, Zimmerman’s lawyers have dropped him as a client, and in any case were already suspected of potentially violating Florida’s ethics code, with a law professor at Florida A&M saying of one statement “at a minimum it’s right there on the edge”. And on top of all that, there is the unexplained behaviour of one of Fox News Channel’s top hosts.

It’s time for Sean Hannity to come clean about what he knows.

[UPDATE1 1740 hours: Sean Hannity has now addressed the issue of his phone conversation with George Zimmerman. Speaking on his Fox show last night, he said this:

"... yesterday I was contacted by an individual that we in fact believe was George Zimmerman. He reached out to me, we spoke on the phone about his case, and I agreed not to report on the contents of that conversation. That's it."

The problem for Hannity is, should Zimmerman be charged over the shooting, that may not be it. He could be required to testify at a future trial]

[UPDATE2 12 April, 1150 hours: the prospect of Hannity finding himself in the courtroom came a whole lot closer later yesterday, as Florida Special Prosecutor Angela Corey confirmed that George Zimmerman has been charged with second degree murder. Zimmerman gave himself up and is now in custody.

If convicted, he faces the prospect of life imprisonment, although that is the maximum term for the offence. Zimmerman has entered a not guilty plea. The nationwide debate over racial profiling continues]