Inevitably, the Super Soaraway Sunday Steamer has been losing sales, as the novelty of the new offering from Rupe’s downmarket troops wears off. So there have to be new and ever more eye-catching stories to keep the punters buying: today brings an exclusive about Simon Cowell (aka The Black Helmet) and a supposedly shock horror poll revealing half of the population want to leave. 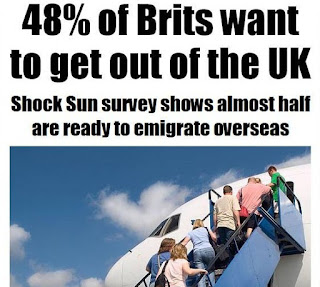 “48% of Brits want to get out of the UK” screams the headline, underscored by the assertion that “Shock Sun survey shows almost half are ready to emigrate overseas”. Well, given the island nature of the UK, it’s stating the bleedin’ obvious that “emigrate” means “overseas”, but then, this is the Sun we’re talking about. So perhaps a closer look is called for.

And the claim falls apart in the first sentence of the piece, as it is admitted “ALMOST half of all Britons are ‘seriously considering’ moving overseas”. Er, that’s not quite the same as “want to get out” or “are ready to emigrate”, is it? In fact, even the “are ‘seriously considering’ moving overseas” is somewhere between misleading and prime whopper, as the question is finally revealed.

Because that question is “Would you consider moving to live abroad?”, and only 6% of respondents say they are “actively planning or considering [my emphasis] such a move”. The 48% headline figure comes after those who “would seriously consider such a move” are added in. And Rupe’s troops don’t pause to dwell on the strange perceptions of their respondents.

Every Prime Minister since 1979 is asserted to have made Britain, on balance, worse. Think about that. Is anyone seriously suggesting that the country was better in 1979 than it is now? Travel was more expensive. Food and clothing cost more as a proportion of income. The Police were ineffective and corrupt. Pubs and restaurants were, on the whole, crap. Buying your own house was, well, difficult.

Yet there is the enduring myth of a warm glow of nostalgia, also shown in the belief that the NHS was better 20 years ago (it wasn’t), as were schools (don’t think so), crime wasn’t as bad back then (you jest) and the economy was better (yeah, right – that was the year of Black Wednesday). There’s nothing quite like a survey for overturning historical reality.

And putting the lid on this daft excursion by Murdoch’s finest are things like the top reason for emigrating – cost of living – then contrasted with one person’s realisation of moving to Australia (“top of the relocation wish list”), that “the only downfall is that Australia is extremely expensive”. That just about sums up the confused and cheap nature of the exercise.

But it helps slow the fall in circulation, so that’s all right, then.

It's always worth seeing how this nonsense plays abroad - someone posted this to fark.com:

The comments make for an interesting read...

No wonder for those non-UK-originated in Australia, from professional backgrounds especially: find-a-job-in-own-community rules.

Surely, the very question remains of a reason for non-Brits to come here.