Rupe’s downmarket troops at the Sun have fixed on a story coming out of the town of Luton, which is interesting in several respects. There is an alleged terror connection, other papers don’t appear to be covering it, and despite no names being issued by the Police, the hacks have already decided that al-Qaeda is involved, and that this means only one thing – Muslims. 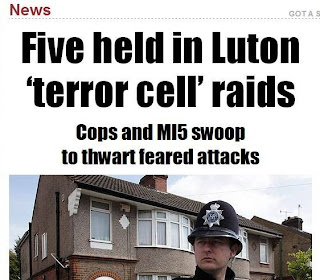 So there has to be a screaming headline: “Five held in Luton ‘terror cell’ raids” satisfies this criterion, backed up by the sub-heading “Cops and MI5 swoop to thwart feared attacks”, although the MI5 presence is not backed up by any of those pesky facts, and neither is the assertion that Luton is an “al-Qaeda ‘hotbed’”. All that is known is that there have been five arrests.

But there has to be some substance to this, so we hear from “An intelligence source”, which is roughly equivalent to telling that someone in the newsroom once appeared on Mastermind. Or Countdown. Or did a Rubik’s Cube very very quickly. It’s a cheap cop-out. And the “intelligence source” can only reveal that there is nothing much to reveal.

The only nugget of information is that there is supposed to have been “chatter about intentions”, whatever that means. But if there was some kind of terror act in the planning, it wasn’t going to be targeting the Olympic Games. Then we get the speculation over identities: one “of Somali origin”, one with a “Bangladeshi background” and one “Briton of Pakistani origin”.

Eagle eyed observers will note that this only adds up to three, which merely reinforces the thought that Simon Hughes and Nick Parker – the names on the by-line – might just be winging this one in the spirit of Phil Space. “Some are feared to have either travelled abroad for terror training — or had been planning to do so” they tell. So they might not have, and just went to the park instead.

But “a computer was taken” by Police, so it must be moderately serious. Serious enough for the Sun hacks to describe a suspect whose identity they don’t know as “the Muslim”, whose neighbour is claimed to have said “I can’t recall him ever having a beard or wearing traditional clothes”. Excuse me, but this is not only utter drivel, but also very obviously made up.

As is the observation at the end, “A local said ‘it’s scary’”. Yeah, right: so the Sun has someone working at the office who lives in Luton, and can therefore be fed a line and called “a local”. This is an utterly shameless inflation of a story from next to nothing, with one objective, and that is to continue the demonisation of Muslims. It’s so bad that not even the Daily Star is running it.

But it sells more papers, and for Rupe and his troops, that’s all right, then.
Posted by Tim Fenton at 16:01