Guido Fawked – Summoned By The ICO

As I noted earlier this week, the action by the perpetually thirsty Paul Staines, who styles himself Guido Fawkes, in making a partial release of material relating to Operation Motorman, brought condemnation from the Information Commissioner’s Office (ICO) and cannot have endeared him to the Fourth Estate, especially the Murdoch empire, whose activities it covered.

Now the ICO has effectively summoned Staines to explain himself, but on this occasion, The Great Guido is stressing less of the customary braggadocio and more of the evasiveness which he no doubt thinks will allow him to bodyswerve a showdown with IC Christopher Graham. But I have bad news for Staines: this is one corner he can’t waffle his way out of. 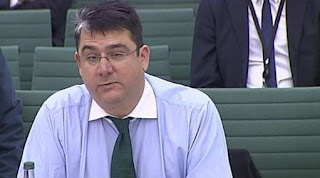 I'm Irish, er, I've got a piece of paper that says so

The defence he uses is curious: “Not sure what jurisdiction the British Information Commissioner imagines he has over an Irish citizen, in Ireland, publishing information on a website hosted in California”. Well, the British IC has jurisdiction over England and Wales, and the information in the Motorman files was compiled by a British citizen, in England, duly raided on behalf of the ICO. 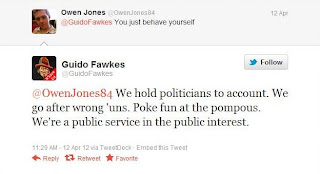 It's all in the public interest ...

Staines’ Irish connection is mere convenience, as is his use of Global & General Nominees, a limited company registered in the tax haven of Nevis. His UK operation is based in London, run out of an office in Albion Buildings, number 1 Back Hill, EC1 (also the registered office of EOS Online Media, owner of MessageSpace). The Fawkes blog is targeted at an overwhelmingly British audience. 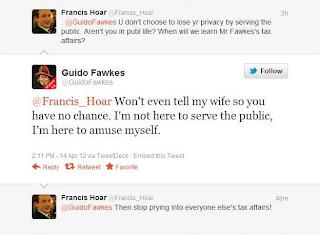 And breaking the laws of the UK, which it is possible that Staines has done, may result in some kind of censure or sanction whatever the nationality of the person doing the breaking. So when The Great Guido returns from Ireland – his being out of the country at the same time as the ICO summonses him being mere coincidence, honestly – he is as liable as anyone else for his transgressions.

In the meantime, maybe he can make his mind up whether he’s performing a public service or not – having faced both ways on Twitter recently – and remember that the IC may not be impressed by his propensity to resort to Anglo-Saxon expletives when folks have the temerity to question his rationale. And he might also consider that he is already in possession of a significant criminal record.

The reality is that, despite the bravura and bombast, Staines and his tame gofer, the flannelled fool Henry Cole, together forming the Laurel and Hardy of the blogosphere, will, when the time comes, do as they are bloody well told. This will then be spun as some kind of great victory for the plucky pair in their fight against authority, a skill that puts them on a par with the authorities in North Korea.

[UPDATE 15 April 1840 hours: Staines has now asserted that he "didn't do [publishing] for profit". So how is he able to find the less than trivial sum of £10,000 to bet on his beloved Bozza being re-elected as Mayor of London?

Staines is also making defiant Twitter noises about remaining in Ireland, which is the usual bluster. He'll be back later this week, and will toddle along to see the ICO and get his ritual bollocking like a good little boy. But the reality doesn't sound edgy and out there, so no doubt there will be much creative spin applied in the intervening period]