The perpetually thirsty Paul Staines, who styles himself Guido Fawkes, likes to tell anyone who will listen that he isn’t really biased or partisan, and that he gives all errant politicians their fair share of stick. This, as Zelo Street readers will know, is complete crap (more HERE). Staines and his tame gofer, the flannelled fool Henry Cole, are blinkered and clueless tribalists. 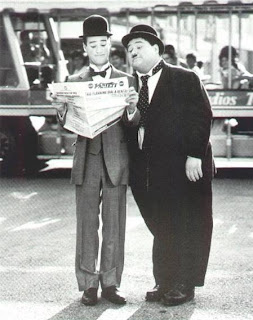 Nothing about UKIP here, is there?

So in the London Mayoral race, the Laurel and Hardy of the blogosphere are shamelessly supporting Boris Johnson, as he’s their kind of person. Staines also has a £10,000 bet on Bozza being returned to City Hall and so the amount of vitriol hurled by the Fawkes blog at Ken Livingstone has been of industrial proportions, with Brian Paddick also attracting some abuse.

But elsewhere, the less than dynamic duo has been leaning towards the Tory right, where they clearly like fringe wingnuts such as Dan, Dan the Oratory Man and his pal Douglas “Kamikaze” Carswell, and more and more towards Nigel “Thirsty” Farage and his band of cranks at UKIP. Thus it is no surprise at all that Staines and Cole have chosen not to notice the weekend’s bad news.

And that is that not only has UKIP has been caught with its hand in the Euro-till, but also that it was Olaf, the EU watchdog, that caught them out. An amount of £37,000 is now being paid back after it was discovered that the money had been diverted to party workers in the UK. Some was paid to the now deceased Graham Booth, but most went to Derek Clark, an East Midlands MEP.

Farage has not brought himself to condemn this misuse of funds, saying that Clark was not “seeking personal gain from public money”. The man himself has proudly asserted that “We believed that we were doing it for Britain”, a sentiment previously no doubt used to justify the swiping of a non-trivial amount of gold bullion in the original Italian Job film.

So what has been the response of the intrepid seekers after truth (Shurely “drinksh”? – Ed) at the Fawkes blog? In a nutshell, silence. And it’s not as if no other blog has picked up on UKIP’s moment of embarrassment: Mark Pack of LibDem Voice, someone Staines and Cole like to read when they want to lay into his party, has written a post on the affair on his own blog.

That means there is no excuse for the less than dynamic duo – unless of course they would rather not embarrass their new best pals at the home of those Young Dave memorably called “fruitcakes, loonies and closet racists”. Come on, Fawkes folks, expenses fiddles are there to be exposed and the culprits identified. Your silence on this issue speaks louder than the pair of you.

[UPDATE 1800 hours: as if anyone doubted the Fawkes blog's leaning towards UKIP, Staines and Cole have come running to the rescue. They have noted the appearance of their friend and soon not to be MP (due to a combination of boundary changes and no other constituency wanting her) Nadine Dorries on the Beeb's Daily Politics, where she had another go at Young Dave and his pal next door.

The title of the post, encapsulating the lack of subtlety that embodies its authors, is Dorries Should Defect. Clearly the less than dynamic duo have not thought this through: not only would she cease to get any assistance from the Tory Party if she jumps ship, but Dorries would also have to give up her Commons perch near Cameron and Speaker Bercow in exchange for having to sit at the opposite corner of the chamber.

There, she would be less visible, as well as having to fight for attention with the DUP, Scots Nats, Plaid Cymru and George Galloway. And if she, and the Fawkes blog, thinks that would be all, just wait for the Tory supporting papers and pundits to unload on her if she defects. It would turn the press gallery into a shooting gallery in short order. Another fine mess, indeed]