Alex Brummer has a new book out. And, as he is City Editor of the Daily Mail, the legendarily foul mouthed Paul Dacre has magnanimously allowed him to plug it in the paper, and Martin Clarke at Mail Online has followed suit. This has enabled prospective purchasers to see that the Mail disease of not bothering to sort facts before engaging rant mode is alive and well.

This, therefore, makes the Brummer opus not worth the candle, especially as the subject – why-oh-why-oh-why have all these ghastly foreigners bought up all these fine upstanding (and patriotic) British companies while our appalling politicians allow the free market to work and stand by as our wonderful heritage disappears overseas – is one where the Mail loves to face both ways. 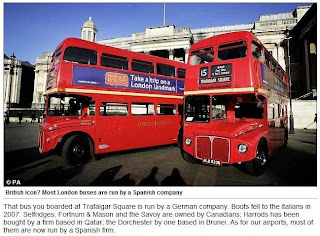 Photo caption howler says it all

Free markets are A Very Good Thing for the Vagina Monologue and his obedient hacks when it means schools, bin collections, and anything to do with the NHS (especially when it also means putting one over on Trade Unions), but are then Very Bad Indeed when it means Johnny Foreigner getting his garlic stained mitts on our chocolate, airports and London’s Iconic Red Buses (tm).

And then there are those pesky facts: a photo of two Heritage Routemaster buses is captioned “British icon? Most London buses are run by a Spanish company”, whereas, in reality, none of them are. Perhaps this means Arriva, but they are owned by DB, a German company. And the Heritage Routemasters are run by Stagecoach and First, two British based operators.

It gets worse: “As for our airports, most of them are now run by a Spanish firm”. They are? Well, six airports across the UK, including three London ones, are run by a consortium led by Ferrovial group, which is indeed Spanish. But those run by Peel Airports and Manchester Airports Group alone total seven, and there is no Spanish interest elsewhere in the sector. More non-existent research.

And the lack of substance extends to nuclear power, where Brummer warns that “the Government is happy to consider letting a Russian firm, the one behind the Chernobyl accident, run some of Britain’s next generation of nuclear power stations”. The reactor design involved at Chernobyl, the RBMK, is no longer produced and the design used in the UK would be similar to that already used for Sizewell B.

But no doubt some will be willing to stump up £12.99 for Alex Brummer’s new book, though goodness knows why. Or perhaps that should be why-oh-why.