Being For The Benefit Of Mr Mosley – 2

Chester’s Tory MP Stephen Mosley continues to claim allegiance to his constituency, while in reality devoting his energies elsewhere. As I pointed out when considering his endeavours previously, Mosley is clearly an admirer of London’s occasional Mayor Alexander Boris de Pfeffel Johnson, and instead of devoting yesterday to his duties in the North West, was on the campaign trail with him.

And he wasn’t the only one: Great Boughton ward councillor Pamela Hall was also absent in London. Clearly this was not one of the Saturdays that she dedicates to ward surgeries. Joining them on the coach to the capital was Tom Bradley of Conservative Future (CF), which is the supposedly united youth wing of the party. That’ll earn Tom some brownie points for his political career. 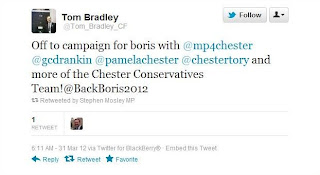 After all, he won’t balk at the chance to climb the greasy pole of the Tory Party, despite their inability to negotiate their way round the Granny Tax, hot Cornish pasties, Jerry Cans or Cash for Access to Young Dave Personally Now. So what did all these bright eyed and bushy tailed Tories get up to when they arrived in London to do their bit for Bozza’s re-election campaign?

Well, they went leafleting in fabled Hendon, that’s what, and here there were no high visibility photo-ops with The Blond to be had. But there had to be a string of positive Tweets – particularly shameless as Mosley was devoting his weekend not to those he represents – to keep spirits up. One has to wonder, in view of all the flak directed at Labour over this, who was paying. 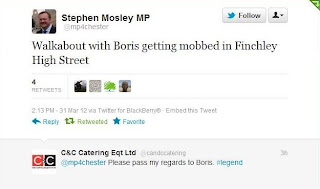 Finally came the afternoon and Bozza arrived to grace proceedings with his presence. So the Chester coachload got to bask in his supposed glory, and Mosley claimed he had been “mobbed” in Finchley High Street. For their sake, this needs to be true, as this is in the borough of Barnet, where Assembly Member Brian Coleman is said to be (deservedly) in danger of losing his seat at City Hall. 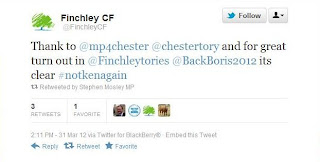 Meanwhile, Chester residents were not all happy at their MP deserting the constituency to campaign in London. That’s why I keep getting suggestions to look more closely at Mosley’s lack of attention when it comes to the place he is supposed to be representing. And even when he does respond to folks, he misses the target, as witness an exchange on policing. 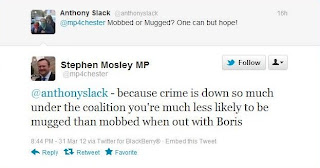 “Crime is down so much under the Coalition you’re much less likely to be mugged than mobbed when out with Boris” he gurgled questionably in response to a prod from Anthony Slack. Mosley might have thought that he had reassured another potential voter, except for one minor inconvenience.

Anthony Slack doesn’t live in Chester, or London, or anywhere else in the UK. Back to the drawing board, MP4Chester!