With tedious inevitability, following the release of tax details by four of London’s Mayoral hopefuls, came the spin, and there are no spinners more wilful and petulant than the perpetually thirsty Paul Staines and his tame gofer, the flannelled fool Henry Cole, at the Guido Fawkes blog, who wasted no time in howling down Ken Livingstone, primarily via the subtle and nuanced method of shouting “liar”.

Yes, two of the most serially dishonest SOBs ever to disgrace the blogosphere are calling someone else dishonest. Littlejohn says You Couldn’t Make It Up. Cole, particularly, was in fine trouser lighting form as he called payments to Silveta Limited “salaries”. They were not, as well he knows from his own media appearances. And his assertion that Silveta is a “shell” is another whopper. 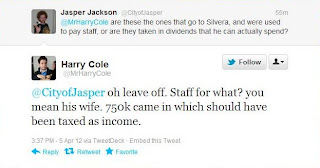 Politicians I don't like should pay Income Tax on money they do not receive!

Then he asserts that everything that came into Silveta “should have been taxed as income”. Why? It’s income to the company. This is wilful ignorance at least, though most probably just another porkie, an accusation Cole then makes as he asserts “his personal income was lie [sic]. I used his actual earnings”. Company income is not actual earnings, so yet another tall tale.

Personal income is what I say it is! 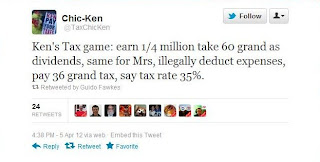 Be a proper coward - use a sock puppet!

What the Fawkes blog is doing is proving that whatever details were offered by Livingstone, they would be selectively used, dismissed or discarded to suit the line of attack, and with the use of a Twitter sock puppet, other “information” would be substituted, with assertion of illegality. Meanwhile, Staines was selling the pass by pretending not to know about corporation tax payments.

I run a company and employ people, and call myself an entrepreneur, but don't know anything about Corporation Tax!

That’s right, the owner of the Fawkes blog, and probable controlling interest in the offshore limited company in whose name the blog is registered, claims to need advice on tax. Then – miracle of miracles – he claims to have received that advice, and it chimes perfectly with his attack on Livingstone! Rien de merde, M Holmes!! And Silveta is asserted to have “done nothing”. Wrong. It traded. 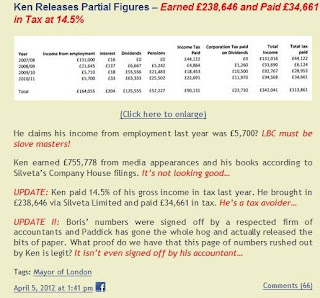 It is suggested that Livingstone pay tax on all of Silveta’s income. So he should pay Income Tax not just for himself and his wife, but his media person and that economist who went through TfL’s books (perhaps Staines has forgotten about them)? Is Staines going to pay Cole’s Income Tax? If not, by his own twisted logic, he’s a tax avoider. 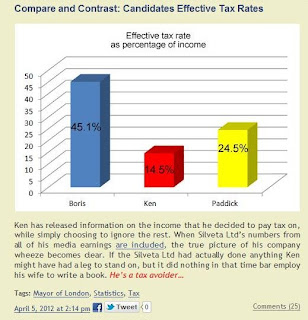 Companies that trade still do not trade! Politicians I don't like should pay four people's Income Tax!

The less than dynamic duo are, it has to be admitted, occasionally regarded as purveyors of truth, certainly by those on the right. The series of blatant whoppers they have told just to stand up their attack on Livingstone should at least give some of them cause to think again about ascribing credibility to this kind of behaviour. But true believers, well, just carry on believing.

Calling someone dishonest by being dishonest? Another fine mess, once again.

[UPDATE 1850 hours: the buffoon Cole has eagerly Tweeted about a piece by Tim Worstall at Forbes Online about Ken Livingstone's tax affairs. If only he had read it first.

Worstall - not my number one fan, as can be ascertained by his asking "Who is this twat Tim Fenton?" - has said of the Labour challenger's arrangements "it is most certainly not tax evasion. I would not even put it into the class of tax avoidance".

"Tax avoidance" is exactly what Cole and his perpetually thirsty boss are accusing Livingstone of doing. So they cite a source that disagrees with their assertion. Another fine mess]