Labour Rape Claim - Look Over There

Bracing themselves for grim revelations - after all, they knew what was in the now notorious spreadsheet recording the names of misbehaving Tory MPs - the right-leaning press needed some way of distracting readers’ attention. And so, despite it being most certainly not a party political matter, they have latched on to a historical allegation of rape against a senior Labour Party official as proof that The Rotten Lefties Done It. 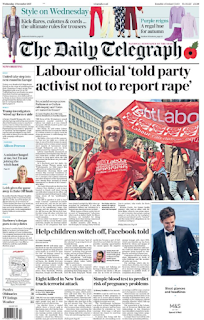 Long-time activist Bex Bailey claims that the assault happened at a Labour event in 2011, but “that when she later asked for advice from a senior member of staff within the party, she was encouraged not to pursue it and that reporting it formally could ‘damage’ her”. Labour has launched an investigation into the claim and asked the Police to also investigate. This is undoubtedly the right course of action. 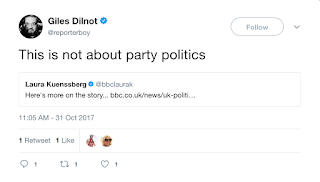 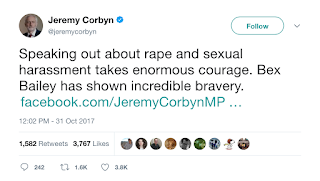 The reaction from those in and around politics shows this: from former BBC man Giles Dilnot, through Labour leader Jeremy Corbyn, the party’s MPs such as Luciana Berger and Stella Creasy, to pundit and activist Owen Jones and Guardian writer Gaby Hinsliff, all have stressed the seriousness of the claim and not looked to politicise it. If only the same could have been said of our free and fearless press. 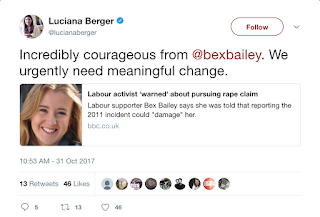 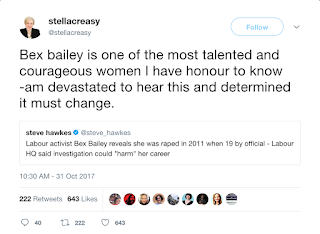 There, the right-wing chorus of sneering and knowing points-scoring is, sadly, as before, from the Murdoch Sun’s teaser “LABOUR COVER UP BEX’S RAPE”, to the Telegraph’s more verbose but equally loaded “Labour official ‘told party activist not to report rape’” [not sure she said that, but hey ho], to the Murdoch Times “Labour ‘tried to cover up rape’” and the Mail’s “LABOUR TRIED TO COVER UP MY RAPE”. 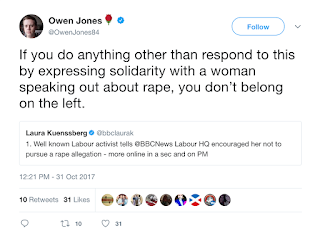 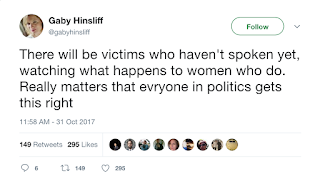 The Mail’s first paragraph reflects the mixture of relief and triumph at the ability to distract from the Tories’ rather more widespread misbehaviour: “LABOUR was dragged into the Westminster sexual harassment scandal last night after party officials were accused of hushing up a rape”. The Tories, if they are mentioned at all, get second billing, with the Times grudgingly admitting “Deputy PM investigated over sleaze claim”. 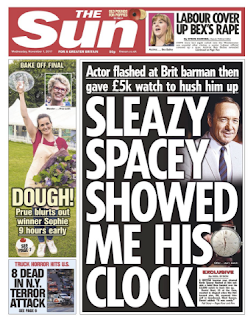 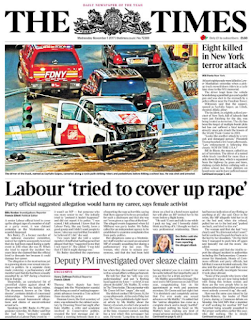 And the right’s favourite shock troops, the perpetually thirsty Paul Staines and his rabble at the Guido Fawkes blog, have been right on message, calling Ms Bailey’s claim “the most serious revelation yet” and stressing - after a nod to overrated MP John Mann, believed to be one of their informants - “The Tories put together a spreadsheet naming their wrong ‘uns. Labour’s brocialists are hushing theirs up”. 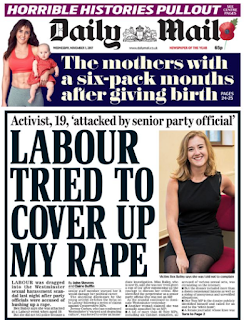 After the sentiments expressed by Labour MPs, including the party’s leader, and the clear action that has been taken following Ms Bailey’s complaint, the idea that anything is being “hushed up” is for the birds. Labour is doing the right thing, given the circumstances, and so should any other political party or organisation facing such claims.

That the right-wing press and their boot boys are behaving as they are tells you rather more about their motivation than about today’s Labour Party. So no change there, then.
Posted by Tim Fenton at 10:20

Must say I laughed me socks down at the obviously untrue accusations made against Damian Green. He looks like he'd rock himself to sleep if he ever managed to get his leg over.

But when he sits next to May on the front bench it does look like he's got his hand up her arse working her. Does that count?

Or should McDonnell be accused of rape on Green after he destroyed him face to face on Marr's load of cack?