Our free and fearless press is nothing if not creative when it comes to ways of frightening its readership. The outside world is frequently cast as a dark and dangerous place, full of Rotten Lefties (tm), Scary Muslims (tm), and of course hordes of Busybody Zealots (tm) hell-bent on enforcing the dreaded Political Correctness. Now we can add transgender scares to that list, as both the Mail and Sun have shown us today. 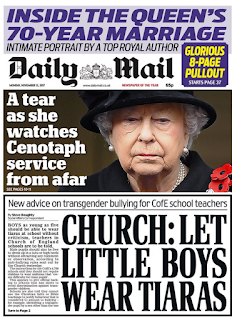 The Mail was in no doubt that so much as mentioning trans issues was A Very Bad Thing Indeed, bringing readers the thundering headline “CHURCH: LET LITTLE BOYS WEAR TIARAS” and showing their audience a photo of a boy wearing a tiara, just to make sure. But as so often with the Dacre doggies, the reality is rather different.

After telling “Boys as young as five should be able to wear tiaras at school without criticism, teachers in Church of England schools are to be told … Male pupils should also be free to dress up in a tutu or high heels without attracting any comment or observation, according to anti-bullying rules sent out by the Church yesterday … The instructions for the CofE’s 4,700 schools said they should not require children to wear uniforms that ‘create difficulty for trans pupils’”, we finally get to what was actually said.

Here’s what the CofE guidelines say: “In the early years context and throughout primary school, play should be a hallmark of creative exploration … Pupils need to be able to play with the many cloaks of identity … Children should be at liberty to explore the possibilities of who they might be without judgment or derision. For example, a child may choose the tutu, princess’s tiara and heels and/or the fireman’s helmet, tool belt and superhero cloak without expectation or comment”. Play. Not everyday uniform.

Still, out come the usual suspects, including Andrea Minichello Williams of Christian Concern, who has protested “We are getting to the point where if you are not careful the slightest slip from the correct agenda in a Church of England school will get you punished. … the anti-bullies are becoming the bullies”. Yeah, right. Did she actually read them? 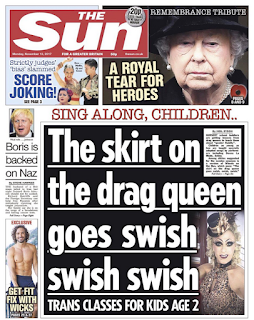 But the Mail has nothing on the Murdoch Sun when it comes to riling the audience. From the headline “Sing Along Children … The skirt on the drag queen goes swish swish swish … Trans Classes For Kids Age 2”, to the claim “TRANSGENDER TOTS … Drag queens sent to nursery schools to teach kids as young as two about ‘gender diversity’”, to the comments suggesting the Scary Muslims (tm) are behind it all - or that it’s all about “paedos” - it’s clear that demonising anything trans is the name of the game.

Newspapers could perform a useful service in explaining trans issues, educating their readers about reality, allaying fears of something unknown or different. But as with so many other aspects of modern life, they choose instead to frighten their readers and entrench prejudice. And that’s not good enough.

Stanley Baldwin has been proved right again: power without responsibility, indeed.
Posted by Tim Fenton at 12:43

How often has Britain's shoddy MSM shown a photo of The Queen with a caption about 'shedding a tear'?
For Heaven's sake, Her Majesty is like every elderly person and her eyes water when she's outside in cold weather.

On the other hand, Tim, what kind of organisation is incompetent enough not to notice that including 'a child may choose the tutu, princess’s tiara and heels and/or the fireman’s helmet, tool belt and superhero cloak' in a written statement is simply writing the tabloids' headlines for them?
Surely the C of E is aware what kind of media world we are living in and that one of their responsibilities is to not make life too easy for the bastards.

I suggest "little boys wearing a tiara" are a good deal less harmful than a gang of warmongering hate-filled neoNazis owning most of print and broadcast media which vomits eighteenth century bile by the bucket load.

But I don't expect Murdoch and Rothermere to understand that, anymore than their little boys and girls employees who dutifully wear swastika armbands.

(Yes, I made up that last bit. But only just. And, anyway, how does it feel Murdoch/Rothermere shills?)

Just noticed the price tag. Do people really pay 50p for the privilege of reading this crap? Sheesh! What a strange thing to do when you could make up your own news stories for free.

@Ferdy Fox
The Daily Mail is a status symbol which should be carefully ironed, to remove creases, and placed on the coffee table for visitors to see and admire.