Richard Kerbaj is the security correspondent for the Murdoch Sunday Times. His work has gained him a BAFTA award and an Emmy nomination. He has participated in such works as The KGB Killers and My Son The Jihadi. He is also the hack who gave Muslim convert Jack Letts the pejorative nickname “Jihadi Jack”. And he stands accused of hanging Letts’ parents out to dry in exchange for personal gain and an easier life. 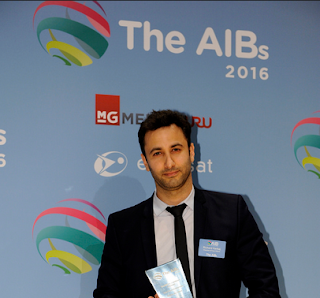 Richard Kerbaj gets another award ...

Kerbaj is the journalist whom this blog said it would name, when looking at the latest pack of lies peddled by the Murdoch press, this time by the Sun, last weekend. His involvement with the Letts family goes back some way, but because of contempt of court rules some of his involvement cannot be discussed at present. But what can be discussed is that Kerbaj was taken into the Letts’ confidence and appears to have roundly abused it.

His Sunday Times story on Jack Letts started the 24-hour news Speculatron rolling. Apart from coining the nickname “Jihadi Jack”, it was Kerbaj who claimed “THE 20-year-old son of a leading figure in the organic food movement has become the first white British male known to be identified as having joined Isis … Letts, a keen footballer and highly regarded student, admitted to his parents that he was with Isis in Syria in September 2014”.

The article also claimed that Jack Letts was using the name “Ibrahim”, but not because this would provide a dog-whistle for those on the lookout for Scary Muslims (tm), oh no (Ibrahim is the Arabic equivalent of Abraham, as anyone who has studied the basics of the Qur’an and Torah will know). Kerbaj’s claims do not match the recollection of Jack Letts’ parents, who have written to all non-Tory MPs to raise awareness of the case.

This is part of what they are allowed to say right now: “Jack insists he was never a member of Isis, and he condemned Isis repeatedly on social media over the past three years. He has condemned Isis' activities as well as the death and destruction caused by the governments of Assad, Russia and the coalition”. And there is more.

“He has stated that, if released, he wants to spend the rest of his life 'bearing witness' against Isis' and making sure the world knows that their teachings are un-Islamic”. Their problem in progressing their case? “We, his parents, are unable to defend him in the media because we have been charged with 'funding terrorism' for having tried to send him money to escape from Isis territory - with the approval of PREVENT and SECTU (the SE Counter Terrorism Unit)”. Richard Kerbaj knows all about that, too.

He also knows that, because of contempt of court rules, as the Letts put it, “we are unable to talk about what we knew about Jack's activities from when he left Oxford in 2014 until our arrest in 2016. As a result, we cannot defend him against the lies and distortions that have appeared in the media, even though we are the only people who actually know anything about his activities over this period”. How convenient for the Sunday Times. 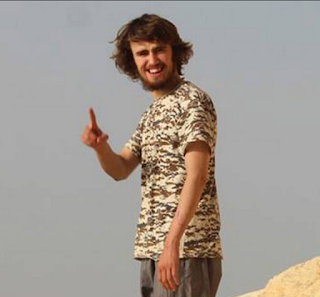 ... while Jack Letts languishes in a Kurdish Jail

And as the Letts’ letter also notes, “The media, however, does not seem to be worried about printing falsehoods that could prejudice our trial and flagrantly breaches contempt of court rulings every day”. It must be something to do with money. And agendas.

Jack Letts’ parents are of modest means. As a result, as I noted earlier, they have become fair game for every less than totally scrupulous hack out there, and their even less scrupulous editors and proprietors. And it is not as if they are terror apologists.

This is what they have to say on that subject: “To be clear, we believe that everyone who went to Syria should be detained and arrested when they return. If they have committed a crime they should be investigated and put on trial, and if found guilty they should be imprisoned or controlled as the law decides. We understand the fear of terrorism, but we also believe in the rule of law, and that people should be considered innocent until proven guilty - unlike the Minister for International Development Rory Stewart and the tabloid press who believe that anyone who went to Syria should be executed at the soonest opportunity”. Perhaps Stewart would care to comment? Perhaps not.

It would be good to see Richard Kerbaj put as much effort into, and promote equally enthusiastically, having the full story about Jack Letts out there so that the public can see what has been going on - not just with one young man’s journey to the Middle East, and his ending up in a Kurdish Jail, but the machinations of the Murdoch press.

Indeed, the impression is given that Jack Letts’ parents were encouraged to send their son the money to get him home from Syria, with the full knowledge that this would immediately be interpreted as “assisting terrorism” and get them nicked. It is almost as if the methods of “Fake Sheikh” Mazher Mahmood had been updated for a new age of media stings.

Of course, I may be totally wrong. So perhaps Richard Kerbaj would like to confirm that he had no knowledge of this possibility, and that nor did anyone at the Sunday Times. But until then, no-one should be holding their breath.

After all, there are awards to win and plaudits to savour. Thus the reality of our free and fearless press, and the care they show for their victims. No change there, then.
Posted by Tim Fenton at 12:47

His parents are awaiting trial charged with funding terrorism. So isn't it the official UK position that he's a terrorist?

Gives a whole new meaning to the term "gobshite Murdoch coward and mouthpiece for the 'intelligence' services".

Any "award" given to somebody like that is as worthless as the recipient.

Ok, we've heard what he WASN'T doing travelling to an area which was being overrun by barbaric religious fruitcakes while being a convert to the religion in whose name the murderous bastards claim to be acting.
But that leaves a bit of a hole in the story. The shape of the hole is: so-what-WAS-he-doing-travelling-to etc etc? Having ANYTHING to do with IS is not the kind of thing to be put down to youthful exuberance, nor is it the kind of thing open to polite legal notions of is-there-proof-he-did-anything-illegal?
What do he and his parents claim he was doing as a young muslim convert travelling to a place that IS had called on young muslim converts to travel to in order to assist with their raping and beheading activities?
I'd like there to be a perfectly innocent explanation, but I haven't yet heard one.

Appalling post from Anonymous 14 November 2017 at 13:35... as though by listing a number of crimes that happen in a country in a post about Jack Letts who happens to now be a Muslim that it somehow must confirm the claims made. It shows the awful danger of the prejudicial nickname given him by Kerbai.
This is how the Gutter Press works: it loads up the story with insinuations and extremely loose "dots" for the reader to join to produce a whole that is not necessarily the truth which may be much more mundane. The British media has been descending into the sewer like this at an alarming rate and it's quite depressing that readers can be so gormlessly influenced.
But maybe it's just another hapless Times' hack dispatched to covertly beef up the tale on Zelo.
Arnold also makes the same depressing mistake that charges and claims that are yet to be tested in court are by their nature true simply because they have been made.
Have these two not taken a blinD bit of notice over the past 2 decades of how our security services have perverted the truth for a variety of reasons, in one case to justify us destroying Iraq and 100,000s of it's people let alone how we ably assisted in breaking up the fragile ME?

Still no sign of any explanation, Sam (and I think you're referring to the 15.40 anon not the 13.35 one).
Stop being appalled for a moment and try addressing the questions raised.
Maybe come at it this way: how many female, middle-aged, non-convert muslims (apart from those with family or professional reasons) have travelled to Syria over the last couple of years?
Young, idealistic, well-intentioned but confused young men can be potentially quite dangerous, you know.
(And you're doing precisely what you accuse anon of when you imply , in your last sentence, that Blair's government's responsibility for de-stabilisation and slaughter in the Middle East means that anything involving the security services since must always be malign).
I'll be interested to hear you address the questions raised.

Look here Anonymous : in time honoured tradition it's not up to me to prove anything or for that matter it's not up to Letts and his parents to disprove claims made. Asking a series of snide questions does not make a case.
I still remained appalled.