This week, Zelo Street is in Barcelona: the empty seats on the flight out from Liverpool today suggest that some punters have been put off making the trip, not a surprise given some of the borderline hysterical publicity from our free and fearless press. That publicity was, as the man said, plain flat wrong. There is no disturbance, no strikes - unlike in Liverpool, thanks Arriva buses - and no security problems. 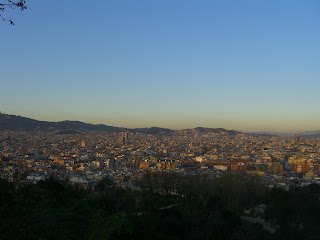 Yes, there are plenty of Catalan flags on display. The first language of the region is still Catalan. But the idea that there might be civil unrest, mass demonstrations and even riots as a result of the referendum controversy, the declaration of independence by the Catalan Parliament, the imposition of direct rule from Madrid, and detention of several Catalan political leaders - that really is for the birds.

The only disturbance noticeable is that there are plenty of what the Spanish call Obras; the sounds and side-effects of construction and renewal. Buildings, roads, railways, all are seeing improvements. And that is another aspect of Barcelona, and indeed much of Spain, that the British press ignores. For them, Spain is a basket case, only marginally ahead of adjacent Portugal. But both Spain and Portugal are seeing growth.

Even the BBC brought us - only last Friday - “‘Long Live Catalonia,’ shouted pro-independence campaigners in St James' Square in central Barcelona. In this plaza, two iconic buildings face each other: the Generalitat (the regional executive) and the City Hall. The Generalitat has now been taken over by the Spanish central government. City Hall has not. ‘Freedom, freedom,’ the crowd in the square chanted. ‘Puidegmont president, Puigdemont president,’ they shouted”. Can’t hear that folks, sorry.

The previous weekend, the Guardian had told readers “‘We are all Catalonia' march brings thousands out on Barcelona's streets … Pro-unity Spaniards from left and right demonstrate in Catalan capital against Carles Puigdemont’s independence movement”. There were photos showing huge numbers of people out on the streets. But there is no sign of them so far this evening. Don’t believe the hype.

Certainly, don’t believe the ridiculous rubbish from the Murdoch Sun, which has claimed “SPAIN’S government yesterday announced it will take over running Catalonia - but denied it was staging a coup … It came as thousands of protesters marched through the streets of Barcelona today sparking fears of a civil war … As the region's president was threatened with arrest he declared it the ‘worst attack on Catalonia’ since military dictator Francisco Franco in a passionate speech to the crowds”. Civil way my arse.

Once more, our free and fearless press has over-egged the pudding. The casualties are travellers from the UK who are missing out on experiencing a great city, and all the businesses in Barcelona who will miss out on their custom.

What's your point, Tim? There have been a number mass demonstrations in Barcelona and other cities. If there isn't one tonight, what is that supposed to tell us?

Unemployment here running at about three and a half million, by the way.

Apparently he struggled against vindictive bus employees (who had the temerity to fight for better employment conditions) and then sought to prove a negative in Barcelona.