Legatum - OH WHAT A GIVEAWAY

The article in Private Eye issue 1454, which set out the links between the new régime at the Legatum Institute, a supposed think-tank and alleged charity, its major backer, and disaster capitalism as practised in Russia after the fall of the Soviet Union, generated little feedback from those out on the right. Nor did Open Democracy’s more recent post on the organisation. But yesterday’s Mail on Sunday sent The Usual Suspects into meltdown. 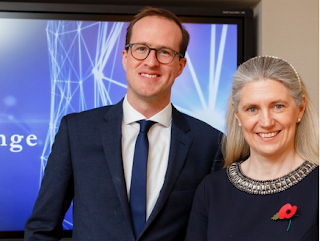 The MoS had tried to join up a few dots too far - taking the Russia connection and the disaster capitalists, snapping up former state assets at knock down prices in the post-communist mayhem and making unfeasibly large profits from flogging them off later, and linking then to the gangsterist régime of Vladimir Vladimirovich Putin, which could only ever have been involved in the process tangentially, and even then at a remove. 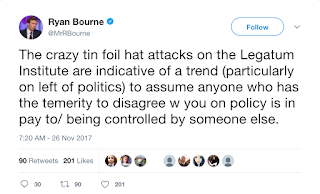 But the story allowed Legatum’s cheerleaders on the right to pour cold water on the MoS in order to dismiss the whole idea that Legatum being behind much of the cheering on of the Brexit movement could be a thing. But all this accomplished was to reveal the network of right-wing anti-EU paid droids drawing attention to themselves. 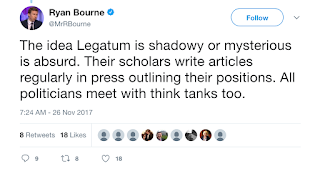 For instance, there was Ryan Bourne, now “Chair in public understanding of economics” at the Cato Institute. “Public understanding of economics” for an ex-IEA and CPS bod now at the place founded as the Charles Koch Institute? Yes, well, moving right along. Bourne told anyone listening “The crazy tin foil hat attacks on the Legatum Institute are indicative of a trend (particularly on left of politics) to assume anyone who has the temerity to disagree w you on policy is in pay to/ being controlled by someone else”.

Mental health smear: check! Yes, it’s the lefties! Then came the smokescreen of deflection: “The idea Legatum is shadowy or mysterious is absurd. Their scholars write articles regularly in press outlining their positions. All politicians meet with think tanks too”. WHO’S PAYING? And then came Mark Wallace of ConHome - Matthew Elliott’s pal from the TPA.

Wal asserted “The Mail on Sunday piece is balls”. And look over there at RT! A Libertarian Rebel had the smear ready: “Comprehensive @montie rebuttal at @unherd of the risible Putin-Leave conspiracy-fantasy unconvincingly peddled in today's MoS by Dan "Migration Matters" Hodges, one-time friend of UAF”. Look over there! Look anywhere else!

But pride of place has to go to the perpetually thirsty Paul Staines and his rabble at the Guido Fawkes blog, running a characteristically abusive post titled “10 People Driven Mad By Brexit” (mental health smear: check!). This told “The Remainiac bug is spreading – even some Remainers who were previously worth listening to have started to sound like tin-foil hatted conspiracy theorists”. Then they sneer at the Observer’s Carole Cadwalladr. 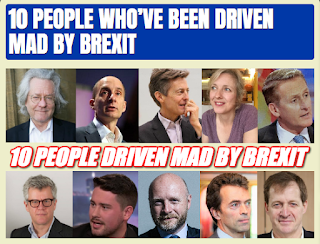 “Last night she suggested lifelong Eurosceptic Michael Gove only backed Vote Leave on the orders of the Legatum Institute, who she reckons are agents of Putin” they claim. No she didn’t. But good to see the lies that get told, the smears that are deployed, and the deflection in which some have to engage, in order to defend Legatum.

Anyone might form the opinion that someone here was protesting too much. To which I can only add, you might wish to think that - I couldn’t possibly comment.
Posted by Tim Fenton at 16:27

The Russian angle is a complete red herring, and if I were a conspiracy theorist I would suggest that the MoS's reference to it was all part of a disinformation strategy designed purely to distract from the on-going examination of Legatum's actual intentions. As with all conspiracy theories the truth is far more scary, that a lobby group dressed up as a "think tank" and bought and paid for by a wealthy foreigner can and has influenced UK government policy on the single most important issue this country has faced since WW2.

Gulliver, from your link:
The greatest concern, though, comes from reading the Legatum website. Having invested heavily in Russia and developing countries, the business speciality is moving into markets at times of crisis where assets are mispriced.
And then they put a chum of Putin in charge?

If I were a billionaire disaster capitalist intent on taking advantage of another countries economic crisis I would think it very useful to have a few inside men ready to oil the wheels for me. Steve Baker and the ERG might do very nicely...

The last 2 paragraphs are the killer: -

"Looking also for opportunities arising from deregulation and further privatisation – especially in the NHS, with Legatum having considerable healthcare interests – hard Brexit presents multiple opportunities. This, after all, is a business that openly states that it "finds value where disruptive transitions create unique opportunities".

In this, the Legatum Institute seems to be paving the way for its "parent undertakings", engineering a "disruptive transition" for Brexit, then to reap the profits from chaos. Its task is assisted by useful fools and fellow travellers on the Tory right. What we have often characterised as incompetence, therefore, may be more sinister. There is money to be made out of a hard Brexit."