Peter Hitchens - Out To Lunch

As the steady drip-drip of revelation shows more MPs embroiled in the sex pest scandal, our free and fearless press, with the assistance of the Pundit Establishment, is struggling to keep up. And what those pundits are revealing by their warped and fearful take on events is that they have no idea of what this is all about. All they can see is the frightening spectre of women having equal status to men - well, frightening to them, anyway. The overreaction began last week, as doyen of right-leaning commentators Charles Moore went over the top in no style at all to tell Telegraph readers - and, as the article is in the Tel’s “premium” category, those readers are expected to pay money to read his thoughts - to whine “This scandal shows that women are now on top. I pray they share power with men, not crush us”. Paranoid overreaction, much? 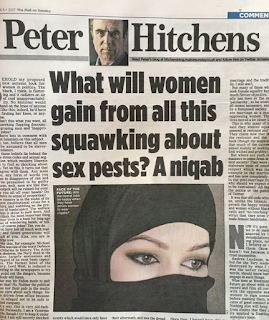 Still, Moore was not alone: over at the Spectator, Doug Murray The K told his adoring following “The consequence of the new sexual counter-revolution? No sex at all …’Feminism’ isn’t producing guides for helping men. It is producing manifestos for torturing them”. All these mardy strops because women object to unwanted comments, touching and more - the idea that there is such a thing as Consent. Or not. 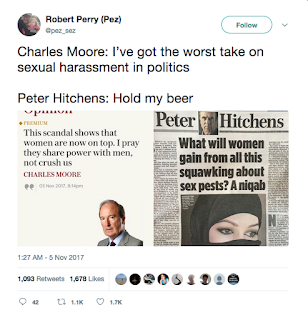 But asking Moore and Murray to take turns holding his beer today is Peter Hitchens of the Mail on Sunday, who has demanded to know “What will women gain from all this squawking about sex pests? A niqab”. Not “an end to non-consensual behaviour”, then.

There was more. Unfortunately for Hitchens’ credibility, rather a lot more. “Well, isn’t this what you want, all you squawking flapping denouncers of groping men and ‘inappropriate’ jokes? You have lots in common with Militant Islamists on this subject. They, too, believe that all men must be assumed to be slavering predators”. What on earth is he rabbiting on about? Who knows, and, indeed, who cares? 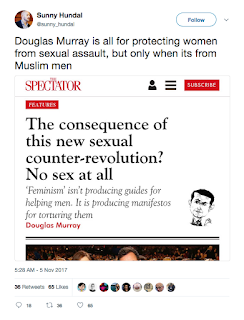 On he drones: “Any male action, any form of words you choose to disapprove of can and will be presumed to be guilty because, well, men are like that. The culprit will be ruined for ever … Are you all off your heads? Do you have no sense of proportion?” Mental health smear of all who disagree with The Great Man: check!

He’s not finished: “The country is in the midst of its biggest constitutional crisis for a century, and wobbling on the precipice of bankruptcy … The welfare system is about to melt down. And you think the most important thing in your lives is a hunt for long-ago cases of wandering hands, or tellers of coarse jokes? Yes, you do … You have lost all touch with reality, and future generations will laugh at you”. We’re all going to die! But maybe not just yet. Sorry Pete, but this is total bullshit. It’s not about “coarse jokes” or “long-ago cases” of anything. It’s about a systemic culture of sexism and misogyny, leering objectification, predatory behaviour, and, just in case anyone missed it when I mentioned it before, Consent. No consent equals no advances.

Small wonder one observer thought Hitchens had been on the Brain Force Plus. Women want to be treated decently. That so many in the Pundit Establishment cannot get their heads round that straightforward concept is a dead giveaway.
Posted by Tim Fenton at 16:28

Not wanting to sling any mud, or anything, but am I the only person who's hearing echoes of The Boy Who Cried Wolf? Hitchens, in particular, seems rather hysterical in his denunciation of women demanding not to be treated as sex objects.

I haven't read the article in full (wouldn't touch the Mail with anyone else's, let alone my own) so I can only go on what Tim has quoted. BTW Tim, thanks for reading all this crap so the rest of us don't have to!

I don't get it. Women are constantly in the spotlight, wearing less and less clothes in the celebrity circle. Go on papers like the daily mail and all the adverts are full of paparazzi shots of celebrities in little clothing, encouraging the objetification of the womans body parts. The whole entertainment industry thrives off selling sex. So, for many women, having lewd comments and lots of attention on their bodies is their whole career. Now, no consent for sex and unwanted sexual touching etc is wrong, that needs speaking up about yes. But, do you see men walking down the red carpet with their shirts off? No, they wear smart suits etc while their counterparts come out with various revealing dresses and do twirls for the camera etc. Why isn't there a problem with this? These women put false ideas into many mens heads. These same women, who show their bodies off for attention, then complain when they get unwanted attention. Hypocrite much?
Have you read a history book? We've been here before, many times.
Now, personally, I don't really care - you want to go out wearing a rag because .... what, it makes you feel good getting that attention? I don't get it. Do you want the attention or not? If you don't, don't make your body an object people want to touch. Get some dignity. It's not just them who it affects, it puts a false image out for ALL women. Lap dancers have no touching policies and bouncers to back the rules up. Are women going to have to hire bodyguards so they can show some cleavage?
Now, you can raise this issue, like I have, and what will be the solution? Muslims chose burqas. Christians chose to make them nuns and called them 'fallen women'. Everything else is going back in time, do you really think this won't too? What do you really think is going to happen? Think about it, I know it's hard. Peter Hitchens is spot on unfortunately. Maybe a bit alarmist in his Islam baiting, but Peter seems to be the polar opposite of Christopher Hitchens who told it all as it is, maybe he should've been less competitive and listened to his brother years ago.
You make your bodies into sex objects to make your career, or for whatever selfish vanity reasons you have, then you are not a feminist, or helpful to the equality struggle. This is not something I want, like I said, I don't care what women do, if they want to be this way then go for it. Unfortunately though there is a very debatable issue regarding certain women bringing their own problems upon themselves and onto others, and that debate ends with women being require to cover up.