Clearly emboldened by sham press regulator IPSO letting the Murdoch goons at the Super Soaraway Currant Bun off the hook for Trevor Kavanagh’s recycling of Holocaust-era hate speech in his talk of “The Muslim Problem”, the obedient hackery of the legendarily foul mouthed Paul Dacre at the Daily Mail has decided to indulge in a little hatred of its own, a hatchet job on what it has declared to be “The Disloyal Other”. 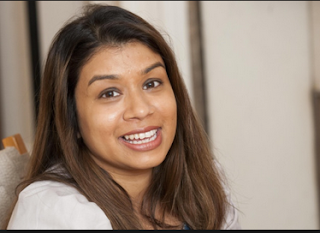 Selected to perform this task has been Dacre apologist Andrew Pierce, a self-confessed Tory who has been putting the boot in on a Labour MP for no other apparent reason than the colour of her skin. Tulip Siddiq, who represents Hampstead and Kilburn, had been involved in a heated discussion with a reporter from Channel 4 News earlier this week - but that was not the reason for Pierce’s attack.

The article tells “Channel 4 had attempted to question Siddiq, who has been campaigning on behalf of her constituent Nazanin Zaghari-Ratcliffe - jailed in Iran - about why she’s ignored calls to take up the case of Ahmad bin Quasem, 33, a Bangladeshi British-trained barrister … Since July 2016 the father has been detained illegally without charge, according to his supporters, by the Bangladeshi authorities after being abducted by security forces from his home in Dahka”. And then Pierce gives the game away. 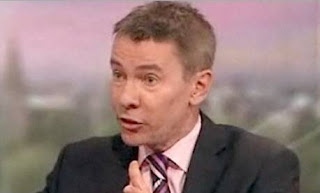 “Despite pleas from his supporters, Siddiq has always insisted the matter was nothing to do with her as Mr bin Quasem is not a constituent - which isn’t really the issue”. Er, hello Dacre Doggies, it is very much the issue. Who is bin Quasem’s MP? It gets worse: “Siddiq’s claim to have no interest in Bangladeshi affairs is further undermined by the interest shown in her by Bangladeshi journalists, who monitor her every move”.

The interest shown does not mean Ms Siddiq has an interest in Bangladeshi politics, the kind of minefield in which it is wise for the uninitiated not to tread, as Zelo Street regulars will know from the unwise and blundering past interventions of former Labour MP Simon Danczuk. But that isn’t what Pierce is driving at.

Telling Mail readers “While no one can fault her efforts to free Mrs Zaghari-Ratcliffe, one has to ask why, given her impeccable Bangladeshi connections, Siddiq won’t make representations on Mr bin Quasem’s behalf too” is crap. What is Ms Siddiq expected to do, establish herself as some kind of rogue Foreign Office? Is every MP with relatives or friends in other countries expected to do the same? 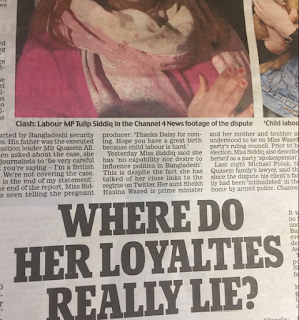 No, the point of this article is all too clearly explained by the banner headline in the print edition, which thunders “WHERE DO HER LOYALTIES REALLY LIE?” The disloyal other. The kind of thing that was bandied about in the 1930s when it was Jews on the receiving end. Now, with IPSO in their pocket, the inmates of the Northcliffe House bunker think they can get away with resurrecting that smear and daubing it all over Labour MPs.

Reporting on the spat between Ms Siddiq and Channel 4 News is fair enough. Using it as a way of dispensing racism-at-one-remove is not. But the Mail will get away with this latest example of hate speech masquerading as concern. And that’s not good enough.
Posted by Tim Fenton at 12:51

Pierce is a typical Heil Gnome squatting under a Rothermere mushroom.

You know, spreading shit and keeping it dark.

Naturally, he gets a lot of TV promotion from our "objective" broadcast "news" organisations.

I mean nothing impersonal when I say he's a disgusting little shitehawk with strong fascist "leanings". A perfect Daily Heil employee.

Well, of course, Tulip Siddiq MP should follow the supremely brilliant example of Priti Patel and have her own Foreign Office operation running shouldn't she?

"Mr Ahmad Bin Quasem is not a British citizen"

It must be a real bind for Ms Siddiq to do constituency surgeries if Hampstead and Kilburn now includes Dhaka.