Tory Expenses - How Dover Was Sold

The increasingly murky saga of all those RoadTrip 2015 excursions that took place before last year’s General Election, and which may have played a key part in seeing the Tories secure an overall majority in the Commons, continues to be the subject of media examination. One of the seats that benefited from the bussing in of activists was Dover, where incumbent Charlie Elphicke was defending a majority of just over 5,000. 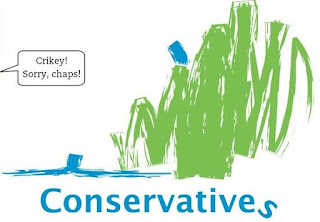 On the face of it, that looks like a moderately safe seat, but Elphicke was taking no chances, and so Mark Clarke’s operation was summoned to give some more firepower to the canvassing. The chosen day was Saturday March 14, less than two months before the election, and definitely within the period covered by the expense rules which the Tories are now being accused to breaking, in some cases by significant amounts.

The event was advertised via Eventbrite, under the description “Roadtrip2015 to Dover ... Roadtrip2015 … Saturday, March 14, 2015 from 8:30 AM to 7:30 PM (GMT) … Dover, United Kingdom”. There is only one “ticket type” available, with a price of “Free” and the explicit statement “OWN TRAVEL (No accommodation)”. So activists would have had to make their own way there, and that would be that.

Except that this was not what was advertised by local Tory Party groups, with Mole Valley, Epsom and Ewell Conservative Future being typical. They posted, on March 10, on the subject of “Roadtrip 2015 to Dover - Saturday 14th March”. Readers were told “Roadtrip2015 is going to Dover to support our brilliant MP Charlie Elphicke. This man single handedly stopped Dover being sold to the French. Let’s be clear, that is sound … But now he needs your help. This will be a fantastic day of campaigning in the iconic Kentish town on the stunning south Kent coast”. Do go on.

“We will be providing FREE transport from London and Canterbury, and as ever give people a FREE great meal and some FREE drinks to finish the day’s campaigning … Day return and over night return options are available. For those staying overnight we are in a 4* hotel for just £25 per person. Total luxury. Total bargain”. The Eventbrite link, however, takes you to the page saying “OWN TRAVEL (No accommodation)”.

Quite apart from the clear inducements of a meal, and drinks, being offered in advance, there is the overnight stay offered in a four star hotel at just £25 per person. Now, I know Dover is not the most expensive part of the world, but £25 a night in a four star hotel? That looks rather like it was subsidised. Which should have gone on the expense return.

And why are food, drink and cheap hotel accommodation being offered by a local branch of CF, but are specifically excluded from the Eventbrite booking form? It’s almost as if someone has thought this one through, and decided to give the impression to any prying outside eyes that no freebies are being offered.

It’s entirely possible that Jon Craig from Sky, and Michael Crick from Channel 4 News, might find this one interesting. Not sure Charlie Elphicke would be so keen, mind.
Posted by Tim Fenton at 12:15

Did anybody seriously think those twisted tenth rate hoodlums in Vauxhall Cross (courtesy Langley), Westminster, Whitehall and Canary Wharf (courtesy Wall Street) could keep their hands in the till without it?