Nothing demonstrates the moral vacuity of the Press Establishment better than the assault on the BBC mounted by the Telegraph this morning. For an organisation accused of serving its audience too many repeats, it is taking the biscuit in no style at all to lead with a story that is, er, a repeat, and an all too obvious one. And then there is the dubious pedigree of the articles’s author to consider. 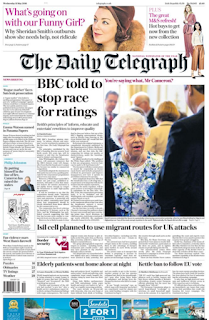 “BBC told to stop race for ratings” announces the headline on Patrick Foster’s article, thus recycling a story that first aired back in 2008, when the Tories were in opposition. Then, it was an article for the Murdoch Sun penned by none other than Young Dave himself which told “The BBC needs a vision that goes beyond chasing ratings for their own sake”.

Cameron went on to say “As our pre-eminent public service broadcaster it should set the standards in quality TV. The mission must be to attract large audiences to quality programmes, not large audiences by going to the lowest common denominator … The argument that the BBC needs to win big ratings on BBC1 to prove that it is providing value is bogus”. The classic tactic of a “friend” giving out what sounds like sensible advice, but which in reality is a prescription to weaken the Corporation and justify selling it off.

And what Foster is riffing on today was trailed last July by the Mail, in an article titled “BBC should axe the licence fee, get rid of The Voice and stop chasing ratings, say Tories: Review to lay down law to the Beeb”, and telling “Proposals to be published this week suggesting reforms to corporation … Culture Minister said to be keen to see 'ratings-chasing' shows scrapped … Radical changes to the licence fee are also proposed by the new report … Board has been appointed to look into the renewal of BBC's charter”.

Yes, we’ve been here before, with John Whittingdale and his team happily briefing hacks with the kinds of stories they want to hear. Now, according to Foster, Whitto and his merry band are going to meddle with the Beeb to make sure they can emasculate it properly and thus gain the favour of the Murdoch and Rothermere empires.

“The BBC’s founding mission statement, ‘to inform, educate and entertain’, is to be rewritten by ministers for the first time, The Telegraph has learnt … The principles, established by the BBC’s founding director-general Lord Reith nearly 100 years ago, will be adapted to add that the broadcaster must be distinct and impartial … a White Paper on the BBC’s future size and scope, published tomorrow, will make it clear that ministers believe the mission statement is not tightly drawn enough to compel the broadcaster to make high-quality programmes”. Just what David Cameron told the Sun in 2008.

And there is something else the Telegraph isn’t telling its readers: while lecturing the BBC about quality and principles, the author of this article is standing in a very draughty glasshouse. Patrick Foster, then at the Times, was “spared a trial over allegations that he hacked into the email of an anonymous police blogger” in 2014.

He “accepted a caution for an offence under the Computer Misuse Act 1990 in relation to the unmasking of the anonymous Nightjack blogger, Lancashire detective Richard Horton, in the Times in 2009”. Foster was spared further investigation into “suspected conspiracy to pervert the course of justice and perjury in relation to the outing of Nightjack”. And here he is giving lectures to the BBC. I’ll just leave that one there.
Posted by Tim Fenton at 09:54

Bit ironic that his editor at the time, James Harding, is now head of BBC News?

Is Harding sympathetic to Whippendale's approach to the Beeb?

"Emily Bell, in The Guardian, thought Harding's objectives were "a little dated and underpowered" and the target of reaching 500 million people: "As [the BBC is] Britain's only global media [player], this seems an unambitiously low bar.(Dec 2013 see Wiki).

Was Harding placed in situ, a gambit played by Murdoch, to hold the Beeb back?

Now why would they back off those much easier targets?