The obedient Murdoch doggies at the Baby Shard bunker are never one to let a good crisis go to waste, even when it isn’t a crisis at all. So when embattled Culture Secretary John Whittingdale - or someone acting with his nod and wink - let the Sunday papers know that some kind of constraint on the BBC’s best rated shows was being contemplated, this was instantly turned into a matter of the greatest importance.

Thus it came to pass that this morning’s Sun Says, under the headline “BBC Baloney”, which sums up rather well what is about to be served up, tells “IT’S been a tough few weeks for Culture Secretary John Whittingdale, but his rumoured plans for the BBC are spot on … It’s a nonsense that the national broadcaster goes head-to-head with ITV for viewers when the Beeb’s cash comes from the licence fee”.

Perhaps the corporation should go off air for most of the day, then? It is precisely because We The People pay the licence fee that the Beeb should provide programming to appeal to a wide range of tastes throughout the day, and why there should be middle-brow shows in the “family entertainment” category of a Saturday evening (for instance). This contributes to our being given a choice. It helps to raise and maintain standards.

But having delivered this steaming pile of false logic, the Sun then says “Through silly scheduling and its over-mighty website, the BBC uses its taxpayer-funded heft to force competitors out of business”. What is “silly” about the BBC’s scheduling? We don’t find that out, because it’s another “look over there” tactic. And what of the idea that the Corporation is using its power “to force competitors out of business”? 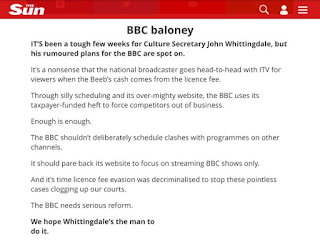 Would the Murdoch shilling takers care to cite one competitor the BBC has forced out of business? It is, after all, a very round number - none. Zero. Zilch. Nil. Nada. Not a sausage. Bugger all. Yet the Murdoch broadcast juggernaut, on the other hand, has done just that, and more than once. The first casualty of Rupe’s TV ambition was BSB, which was officially merged with Sky, but was effectively taken over.

And after that, the competition posed by ONDigital, which rebranded itself as ITVDigital, was crushed under the weight of a dirty tricks campaign that involved widespread hacking of its security, killing its revenue and yes, forcing it out of business. The Murdoch mafiosi maintain they had nothing to do with the hacking of ONDigital, but the hacking trail allegedly led back to NDS - a News Corporation subsidiary.

In print, the Murdoch Times entered into an aggressive price-cutting war in order to damage the Independent, something that finally succeeded when that paper ceased to exist in print earlier this year. Yet here is the Sun telling its readers - in a blatant slice of dishonesty - that the BBC is the one that puts others out of business. Well, if you’re going to pull a lie out of the bag, make sure it’s a big enough one.

The Murdoch mafiosi have no room to call on the BBC. No change there, then.
Posted by Tim Fenton at 17:23

What an absolute bunch of shite.
Those idiots need to take a step back and look at what their vile tactics has done to British journalism.

If any decent journalism is to survive, they need to get rid of the cancer that is rapidly eating through anything good.

Those who he managed to buy,shame on you !
You deserve to fall with him.


All of the decent journalists and media will continue a good career because the truth,honour and dignity stands by itself.

And of course, if the BBC did ditch the talent shows and start showing worthy documentaries on a Saturday teatime, the Murdoch army would be screaming about how it's "elitist" and "out of touch".

And following on from the previous Anonymous comment: If the Beeb showed a drop in ratings then there would be even greater demands that the licence fee be scrapped because no-one is watching.

Either way the BBC can't win. They're successful and good at something then they are 'stealing' from commercial rivals. They do less well and they should be closed down. It gives Murdoch's boys something to whine about.

What would the Sun and the Mail write about without the BBC?

Would that be the same newspaper that refused to put the result of the most serious inquest in British legal history on its front page......and its coward of an editor Gallagher refused interviews on the subject?

Apart from that......am I the only one to note the irony of a neocon rag that promotes so-called "competition and free trade" - and then whinges when one of its competitors run rings around its Mafia boss and his brats?

Rupert and his employees wouldn't be such a gang of extreme right wing gutless, hypocritical, cowering liars would they?

Of course, none of the scrotes who've winged about a 10 minute overlap on a sat night have also pointed out that the big 3 soaps never overlap. That scheduling isn't an accident, by any means.

Telling, of course, that the Murdoch scribblers have no recourse to notions of quality. (I know - how could they). But that is the outcome to go for.

When all the 2nd division channels field their own Mary Beard, their own Michael Wood, their own Brian Cox - to name a recent few - then they have a right to moan.

And how sad that Whittingdale is still there. Carte Blanche to shaft whoever he wants - as long as the Beeb gets shafted too.

There was a time when his sort would have been laughed out of the parliamentary playground. Right now, the right-wing feels quite safe in pi**ing over one and all. How sad our public life has become.

lol. bbc are fairly incompetent. well, the editors are certainly. A report is usually more effective when bulletins are of similar context . lol... and often the editing is SOOO manipulative of the subject and accuracy ofw hat was really said, it makes it awkward to watch. lol. Where as, the sublimery context is more often than not, very clever, but not constant. As for the sun, well, its direct, and often is written in humour. Mainly mocking the fact its even reported widely, as often not true in any paper, so they often add bullshit on purpose. Its a clever ploy, however, i fear many of the readers fail to recognise its crafty 'pause for thought inputs'. And finally...... Murdoch.... well....... all he reveals has been largely true. lol. But got the book thrown at him, which is laughable now, seeing as the US former office did same on larger scale, as well as placing national scurity in danger by leaks. I get the fact, a story is a story, tart it up, etc etc. But when a leak its self is highly irresponsible and highly illegal, let alone amazingly disrespectful, then the line has been crossed. Is happening world wide with UN's and 'org' and sleepers being paid and given such rewards to simply, project a constant vibe, smoke screen, opinion, insinuation on a very one sided playing field!
Wire taps, disregarding patriotic honour and self respect, wish and safety of civilians being ignored, infact..... Its more than embarrasing. lol. UK is no better. Thanks for that btw. Further protests, petitions, blatant jives to infuriate people of a particular view opinion or (select few, being, fact based and JUST KNOW) is just starting a fight. Racism wasnt an issue until 8 yeasr ago. lol. Free movememnt...GOOD ONE...... free speech..GOOD ONE.............result?? turns out, right are mainly 'right/correct'. Simply based on the fact that so called, left (glad we all know left n right now) are convinced that the 'news' is 100% gospel. lol..meh.welp.this wont get posted anyway....... but glad you read it. Was all i needed in fairness. Back what i say also, but may be anonymous another time. lol