While the rest of the world looks anxiously at what might have happened to Egyptair flight 804, ponders the future of Britain after next month’s referendum, watches the spectacle that will be the US Presidential election, or perhaps wonders when Muirfield and its members are going to join the 21st Century, the Super Soaraway Currant Bun has thrown a front page mardy strop over its inability to bend the courts to its will. 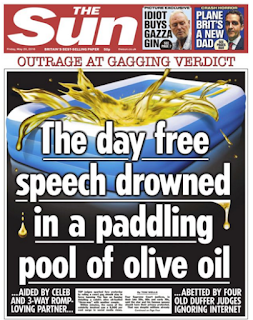 It was all the most discerning rant connoisseur could have wished for: “Outrage At Gagging Verdict … The day free speech drowned in a paddling pool of olive oil … Aided By Celeb And 3-Way Romp Loving Partner … Abetted By Four Old Duffer Judges Ignoring Internet”. The “Old Duffer Judges” are aged between 59 and 72. The bloke who owns the Sun is 87. Still, it’s all relative, innit? And there’s more.

“Ignoring Internet” is what the Sun urges its readers to do all the time. We are constantly being lectured about how social media is full of rotten lefties, and that only those who have taken the Murdoch shilling are fit and proper purveyors of The True Wisdom. This, of course, is purest bullshit, as is the Sun’s suggestion that what was handed down by the Supreme Court yesterday amounted to a “Cheater’s Charter”.

On top of that is the selective appetite for exposing sex scandals: the Sun was offered the John Whittingdale story, but on that occasion came over all respectful and reserved, and passed on it. Compare and contrast that with the behaviour of the Sun’s former sister paper, the late and not at all lamented Screws, which went to considerable lengths to expose former motor racing supremo Max Mosley.

And what the Sun will not tell its readers is the real reasons they have gone totally gaga this morning, none of which have to do with press freedom. One, this action has cost the Murdoch mafiosi one heck of a lot of money, and they have ended up with nothing to show for it. Two, a major objective of running the story was to flog more copies, which for the Sunday edition of the paper is an urgent requirement.

Yes, the Sun on Sunday is losing circulation at a worrying rate - most likely because it’s crap, even compared to its weekday stablemate. And the third reason the Sun has lost it today is that one of those involved in this affair has, in the past, taken the paper to the cleaners. The press never forgets that, however bad their behaviour at the time. This is also an act of pure vindictiveness by the lowest form of journalistic life in the UK.

On top of that, nobody cares what the inmates of the Baby Shard bunker think. The end.
Posted by Tim Fenton at 10:10

They must have paid a fair few bob to the couple who came to them with the story (whose motives for spilling the beans can only be monetary).

I came across no outraged folk yesterday - even in the London rush-hour.

Many of us have no interest in all this, no knowledge still of who is involved - and had forgotten it might still be 'an issue'.

And linking your previous piece to this one. Who gets a 10m listeners figure from the latest Barb ratings.

If it's such an important story in the public interest, they should just publish the names and refuse to pay any fines.

The editor of the Sun willing to go to jail to defend press freedom would actually make me respect him a lot more.

Even Blind Freddy knows who this Olive Oiled celebrity couple is and if the general public found out who they are I'm pretty sure it would be an anti-climax. The Setting Sun should probably hope they never get to reveal who they are as I reckon the reading public may feel rather miffed if they knew the names.
But is there another reason they are so furious?. Recall, some decades ago said Olive Oil Bather won a fantastic libel action against The Sun.

"Yes, the Sun on Sunday is losing circulation at a worrying rate - most likely because it’s crap,"


Made me laugh aloud.

You have writing style that is funny, factual and a joy to read.

Don't ever give up.

It's the olive oil bit the Sun hates. Greasy stuck-up EU muck. Why couldn't they do it in good British lard like true patriots do?

You reminded me that it was a previous editor, a Mr K MacKenzie, who was responsible for that £1,000,000 payout for telling lies in 1987. Yes telling lies.

A whole 19 years later the Sun is still telling lies. Who would've thought it?