As the first show in the new series of BBC Top Gear was broadcast yesterday evening, some viewers were merely curious, some happy to see a new team in charge. But the most vocal were the obedient servants of the Murdoch mafiosi and their hangers-on, still sore at the removal of their man Jeremy Clarkson for an act of gross misconduct, and the installation in his place of Chris Evans and Matt Le Blanc. 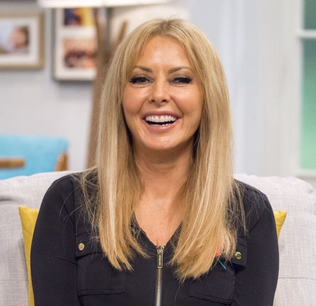 And there was no more ardent supporter of Jezza and his memory than former Countdown numbers person (but now reduced to self-promotion specialist) Carol Vorderman, who has clearly not been invited to be a guest star on the new Top Gear, probably because she is not only not a star, but arguably never was in the first place. 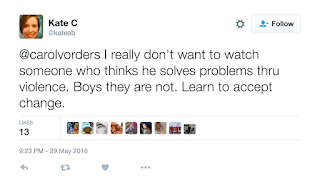 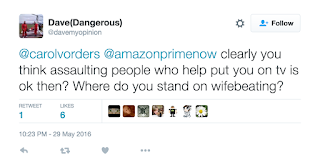 “So it's Fine For Clarkson to Assault People” mused one. A fuller reply suggested “I really don't want to watch someone who thinks he solves problems thru violence. Boys they are not. Learn to accept change”. Indeed. And one punter who was clearly unimpressed added “Clearly you think assaulting people who help put you on tv is ok then? Where do you stand on wifebeating?” Ouch! 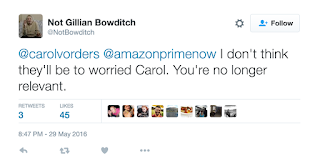 Moreover, it did not go unnoticed that Ms Vorderman had previously been on good personal terms with Jezza and his crew, having appeared on Top Gear in the past: “because you're mates with them” was one reply. But she wasn’t getting much TV exposure nowadays, with one reply concluding “I don't think they'll be to worried Carol. You're no longer relevant”. Ouch again! 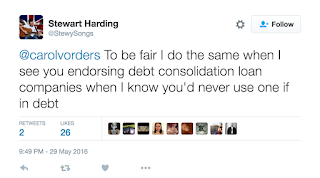 Indeed, her less than stellar televisual past and present was never going to be far away, from a reminder of her current circumstances - “To be fair I do the same when I see you endorsing debt consolidation loan companies when I know you'd never use one if in debt” - to one of the last serious programmes she did, all of six years ago: “Can't be as bad as your appearance on Question Time”. And another Ouch! 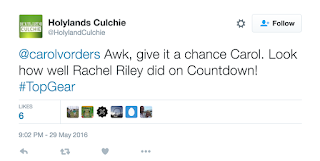 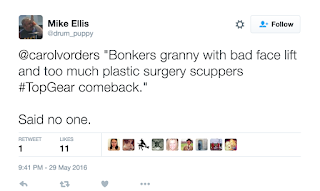 The adverse comments came despite Ms Vorderman’s penchant for blocking anyone doing so. And there had to be a Countdown reminder: “Awk, give it a chance Carol. Look how well Rachel Riley did on Countdown!” That Tweet earned got its author blocked. Then came the final, cruel twist, with “‘Bonkers granny with bad face lift and too much plastic surgery scuppers #TopGear comeback’ … Said no one”.

Carol Vorderman was never really a star, and now she’s just scratching around for attention. Sad, really.
Posted by Tim Fenton at 09:56

Sorry Tim , but that last tweet , you feartured, was worthy of a Murdoch's Sun . To attack Voderman on her appearance and call her 'bonkers' is pathetic .

Vorderman might be able to add up, take away and divide but that's about all.

Nowadays she's like a late middle age supply teacher still in crisis about the head teacher role she never got.

As a TV critic she makes a good Murdoch jobsworth. Which is to say a talentless hack of a yeswoman. Mainstream media is full of them.

Totally agree with Lee Saunders on this. Not a tweet worthy of being regurgitated.

Regardless of any opinions I may have on Jezza or others, I believe some things are sacred and Top Gear will never be Top Gear without the original line up.

What these "responses" promoting Clarkson and co. show is just how easy it is to create an air of hysteria for a racist, no-talented, empty headed thug.

The fellow and his hangers-on petrol-heads are a disgrace to civilised living. So it seems self-promoting Vorderman has found the right company.

I hope Clarkson's venture into Amazon blows up in his internal combustion ugly face. After which, usefulness at an end, he gets sacked by Murdoch. But he could always start up his own newspaper in Chipping Norton, or whatever else dead-and-alive-hole he resides in. Then he could "employ" Vorderman to do.........what?

I thought last night proved that the names don't matter as long as they can carry the script off. Production was up to par, despite loss of Andy Wilman after Clarkson & Co. Stunts and ad-libs were all planned well in advance - just like before.

@Top Gear Fan. I quite agree. Bring back Angela Rippon and Tom Coyne,

I'm not that old. I don't remember those.

I could do that Top Gear lap easy after my usual 60 pint drinking sesh.

I don't have to worry about being breathalysed either !

@ Top Gear Fan:
"The longest serving originals" - that WAS Angela Rippon. Original has a dictionary meaning, it doesn't apply to Clarkson & Co.

"I'm not that old. I don't remember those." and that's the point, people soon forget. In 2 years time who will remember your favourites. James May might still have his semi-educational stuff, Clarkson might pull himself together and do some more historical stuff (which he's actually quite good at). And Hammond will be in panto (along with Vorderman) if he's lucky.

And don't forget, there was a series of New Top Gear without May that's never repeated.

Personally, I thought the show wasn't very good, with the best presenter they have relegated to the extra program afterwards.

One thing, there's no way Hammond will end up in panto - he's way, way too competent a presenter and there's a shocking lack of those in TV at times.

About an hour after the end of the programme a twitter counting site had 19% liking the show and 81% hating it. That was with 70,000 tweets so it seems quite a lot agree with Carol. Today's Mirror headline (not a Murdoch publication) "FLOP GEAR". The main problem was the constant SHOUTING from Chris Evans. TFI Friday with cars.

It was Angela Merkel who was the origina presenter.

You lot talk some rubbish !!

Ever heard of FACTS ?

Tim, I take your point about Vorderman. But Lee and Pilar are right; republishing the misogynistic tweets is nevertheless out of order.