That Murdoch-bankrolled website Heat Street is not only less credible than the Drudge Report, Guido Fawkes and even Breitbart, it is also, in its projection of (thankfully) former Tory MP Louise Mensch’s prejudices, terminally inept when it comes to doing something so basic as interpreting a Google search (Ms Mensch was famously ridiculed after misunderstanding Google search auto-complete). We know this thanks to an article titled “Race Riot School Claims scrubbed from Google”. 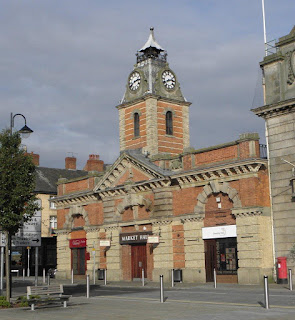 Heat Street earlier this month reported on a playground fight at a school in north west England - that had happened back in February! Why the delay? Once again, this is down to the obsession of Ms Mensch: the school concerned, the Sir William Stanier Community School, is in Crewe - the same Crewe where Zelo Street is based.

Here was a chance for Ms Mensch to tell the world that the home of Zelo Street was a lawless place, a hotbed of racial tension and unrest at all those scary foreigners. It was, to no surprise, bullshit, and not even well-crafted bullshit. Six students were excluded from school, and the rest was the stuff of ignorance and rumour. We know this as the Police attended after the fight, and their record matches that of the school.

All mainstream local politicians, including MP Edward Timpson - from the same party that Ms Mensch once represented - have worked with the Police, the school, and the communities involved to tackle any concerns. As befits a good Heat Street story, the only one shooting his mouth off is Brian Silvester, who jumped from the Tory Party before they kicked him out after he was convicted over his fire trap bedsits. Silvester is now in UKIP, who clearly aren’t fussed about their representatives’ criminal records.

So there was no story, but for Heat Street, if you don’t succeed, well, wait a week and then suck some more seed. Now, readers are told “A school which was the scene of an alleged race riot is having its Google search results manipulated, apparently to banish unflattering accounts of the incident … Further investigation into the aftermath of the brawl has shown that the EU’s ‘right to be forgotten’ laws to manipulate its search results”.

That doesn’t make sense, which is not good for a website headed by someone who read English Language and Literature at Oxford. Moreover, telling readers “searching its name within the EU brings up a warning that results have been changed under the ruling” shows a staggering level of ignorance. Many EU based Google searches carry that warning.

When it is discovered that “Comparing search results from the UK, an EU member, with those from the US shows there is indeed a difference”, that does not mean any results have been “scrubbed”. It just means the sets of results are different. But how about one last try for credibility? “Nonetheless, the school, which has already proved itself willing to go to extreme lengths to guard its reputation, has much to gain from changing how it appears to the outside world”. Yeah, right.

They hired a solicitor and a PR to deal with the press and any legal hassle. Hello Heat Street droids! That is not exceptional. And Crewe is still not a lawless hotbed of racial tension. As if a resident of New York City has room to call anyone else out on that.

[UPDATE 1630 hours: just to show the level of ineptitude in operation here, a Tweet advertising the Heat Street article from Louise Mensch herself is included. 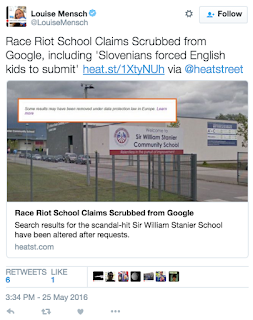 In it, she claims "Race Riot School Claims Scrubbed from Google, including 'Slovenians forced English kids to submit'".

There were no claims including the term "Slovenians". There are, as far as is known, few if any Slovenian citizens in Crewe. The word Ms Mensch may have been searching for is "Slovakians".

The defence rests. No further questions, m'Lud]
Posted by Tim Fenton at 16:05

So "...someone who read English Language and Literature at Oxford."

It's the Oxbridge mob who either took part or did a Pontius Pilate as this country went down the shitter years ago. And now do next to nothing as matters get even worse.

Oxford and Cambridge are little more than ghettos of elitist bullshit and lies, where the faculty and students long ago gave up humanism for Canary Wharf, Wall Street, Whitehall, Westminster, Murdoch and Rothermere. They long ago lost touch with the realities of life in Britain and have rightly earned widespread contempt because of it. They have become pitiful excuse-makers of the worst type......And that "someone" is a perfect illustration of the type.

The confusion over what has been removed from Google under EU Privacy rules is made worse by the fact that Google's UK operations now seems to put a warning note after any question that involves a name (it even does it if you search for Louise Mensch!!). Searching using a Google operation in other domains will not show the warning - but results are commonly resorted based on their importance to the domain. So if you search for Crewe in the UK then the real one is usually high up the list, whereas if you do it in the USA then the namesake in Nottoway County, Virginia may take precedence.

I can also assure the free world outside of Murdoch control and corruption that Crewe is currently peaceful. I regularly use the chippie along the road from the school in question and the only foreign accent I've heard is Aussie!

By the way Tim, don't forget that Mr Silvester recently threatened to sue someone for libel simply for using the nickname Slimevester in a letter to the local paper. He might come after you!

I don't see much evidence on Heat Street that they seek the other side of the story. Same old media rubbish, reporting opinion as fact, gossip as gospel.

Heat Street moans away about censorship on other platforms like Facebook. Mrs Mensch re-tweeted some bloke criticising some other bloke for turning off comments on youtube, because apparently if you don't allow comments, it means you know you're wrong..... And I still can't find the comments button on Heat Street.

@Anonymous - I believe it's a reference to an earlier story, about La Mensch getting her knickers in a twist over grammar in a Facebook post: http://zelo-street.blogspot.co.uk/2016/05/dont-menshn-bad-grammar.html