Broadcaster ITV has been beefing up its news and current affairs offering of late: following the appointment as political editor of Robert Peston, and the launch of his new Sunday morning show, has come another high-profile appointment, that of economist Noreena Hertz to the role of economics editor. The press, already grumpy about Peston, have reacted most unfortunately to the promotion of Ms Hertz. 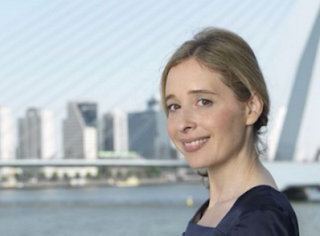 In doing so, those complaining about the appointment have revealed an exceptional ability to use carefully coded language in order to indulge their prejudices, and also let the world know that it is not just the hated BBC that is going to get it in the neck going forward. Newspapers are facing not just falling circulation, but also falling advertising revenues. ITV and other commercial broadcasters are safe havens from that storm.

The problem is, there are very few berths available for all those aspiring hacks and pundits. So when someone gets the nod from outside the ranks of the Fourth Estate, the sense of press entitlement, combined with resentment and jealousy, is likely to trigger a full-scale mardy strop. So it has been with Ms Hertz, with the Telegraph being first out of the traps with a suitably pejorative slant on her appointment.

“ITV is to appoint a left-wing academic with no journalistic credentials as its new economics editor, in a bid to make News at Ten more personality-driven than its BBC counterpart” announced Patrick Foster’s article, going on to tell that Ms Hertz was “an academic and author who has claimed that democracy is being undermined by increasingly powerful global corporations”. She is clearly not “one of us”. 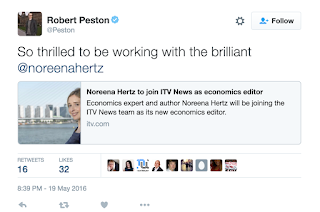 Over at the Daily Mail, the obedient hackery of the legendarily foul mouthed Paul Dacre decided that, having seen the Tel’s hatchet job, they would raise them a few chips: “Backlash over ITV's new economics editor: Journalists are 'horrified' by decision to appoint Leftie with no TV experience (and whose husband is politically correct former BBC boss)”. In doing so, they let slip more of the real reasons for the hostility.

Noreena Hertz is married to Danny Cohen, for so long the target of much press bile, a practice that reached its zenith with the suspension, and later dismissal, of Jeremy Clarkson last year. The Mail gives her the full broadside, with one nameless critic telling ”On Twitter she follows all the usual Lefties like Alastair Campbell, Russell Brand and Polly Toynbee, but not the International Monetary Fund or the Bank of England”.

She is denounced as a “luvvie”. Her new colleagues are alleged to be “in open revolt”. Readers are told she is one “of a group of powerful figures at the top of British broadcasting”. The Mail sneers that she and Cohen are a “childless couple” who “finally married after a lengthy engagement”, that they are friends with Nick Clegg and his wife, and, horror of horrors, she may have written more than one letter to the Guardian!

Sad that the press should not only think that ITV’s appointments process is any of their business, but also that they are prepared to smear those appointed just because of who they married, and that one of their own wasn’t up to the job. No change there, then.
Posted by Tim Fenton at 16:38

The term "politically correct" is always a giveaway for a Nazi smear.

For instance, Murdoch-Rothermere jobsworths are paid to ignore the fact that Britain is owned and run by far right oligarchs, racists and fanatical thieves. Which, of course, is where real "political correctness" (literally) lies. None of the hacks would dare step out of line.

So......all you politically correct Murdoch-Rothermere gobshites - when are you going to summon the guts to whistle blow on your lying employers?

ITN is ITV's news service,so Ms Hertz's is an ITN appointment, not an ITV one. ITN still exists as a separate entity, even though ITV news is no longer branded "ITN" on-screen. An important distinction, even though the papers -- rather ironically -- don't seem to perceive or understand it.

The fools - can't understand why they passed up toadmeister

No. No I'm not blowing in to that thing.

Let me have my keys occifer.

I need to drive both of my cars you see before us home.

”On Twitter she follows all the usual Lefties like Alastair Campbell, Russell Brand and Polly Toynbee, but not the International Monetary Fund or the Bank of England”

Perish the thought that the economics editor of a news organisation might get information on those organisations from their respective press departments and professional contacts, rather than their public Twitter feed...

Perish the thought that someone who knows their subject is entrusted to explain that subject to the viewing public. Journalists - hello Michael, hello Boris - have a tendency to assume they know a subject inside out and bluster - bullshit? - their way through.

Stephen Appleby's cartoon about Gove vs the aliens says it much better than I ever could.