The arguments for and against Britain’s continued membership of the EU are - sadly yet predictably - becoming louder and more strident as referendum day approaches. And in the heat of debate, it was only a matter of time before someone pulled a whopper so bad that the ensuing blaze would demand swift access to the nearest fire extinguisher. For Portsmouth North’s Tory MP Penny Mordaunt, that moment came this morning. 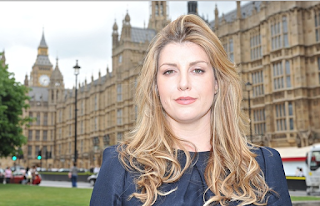 Ms Mordaunt is campaigning for Britain to leave the EU, and in this capacity appeared before the host’s inquisition on The Andy Marr Show (tm), where she was questioned over suggestions that a million Turkish citizens would come to the UK over the next eight years. Turkey was not an EU member state, argued Marr, and so the concept of free movement of people did not arise. So where did Ms Mordaunt get her figure from?

Marr was right: as Sky News political editor Faisal Islam has pointed out, Article 49 of the EU treaty states “The applicant state shall address its application to the Council, which shall act unanimously”. This means any country applying to become a member state has to receive approval for its application from all existing member states (which, in Turkey’s case, is not made easier as two of those are Greece and Cyprus). 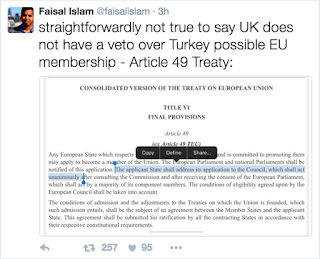 So what did Ms Mordaunt have to say to that? The exchange went as follows:

That is not just a “mis-speak”, a slip of the tongue, or a misunderstanding of any kind. It’s a flat-out pants on fire moment. The idea that a Member of Parliament, and one who has been put up to speak for the Leave campaign, does not know such a basic fact is unimaginable. Penny Mordaunt was so desperate that she lied, live on air.

It was therefore no surprise that when Young Dave was asked to pass comment on her assertion later by Robert Peston on ITV, that he effectively put the boot in on Ms Mordaunt, albeit in an answer crafted rather more diplomatically. What made it even worse was that Andrew Marr gave her a chance to modify her stance later in the interview, but she declined that offer. This morning has not been a good one for the Outers.

And there are more than 30 days of this to go. Not looking good for the Brexiteers.
Posted by Tim Fenton at 13:10

Style over substance as usual. It really was a car car ash moment.

Perhaps she's been taking lessons in bending the truth from Boris. He's an expert in that. All this pales into insignificance though compared with today's Express front-page headline "12m Turks say they will come to the UK"

The trouble with all this nonsense is that many people will believe it.

Getting very tiresome, is all this.

I wonder which desperate fool gets the short straw of sunday morning TV appearance next week.

As DBC says, people do believe all this crap. You'll hear it being relayed on the bus tomorrow.

I've already heard the Turkey thing being talked of as a reason for voting Leave. Sadly these people are immune to facts; when challenged they either flat out deny that a veto exists, or claim that it might as well not exist because we won't use it. They also ignore the rather inconvenient fact that there are a whole shit load of criteria, on human rights, economic policies, freedom of the press etc, that a country needs to meet before it can even be considered for accession. Since Turkey first requested to join the EU over 30 years ago they've only managed to meet one of these criteria...

Lets face it, anyone who reads the paper that claims Diana was murdered on the instructions of DoE is more than immune to facts, they are immune to reality!


Erdogan is steadily making Turkey less compliant with EU terms, I think most countries would have told him to get lost months ago but they are also in NATO and the airbases are currently quite important.

Sadly, it doesn't matter if it's true or not. What matters for the Leaver camp is whether people believe it. So long as people are heading into the polling station with a vague memory of the "fact" that a million Turks will be headed to the UK if they put an X in the wrong box, her lie has done what it needed to do. This is the reality of politics now - bluster, confuse and distort, safe in the knowledge that by the time it's been debunked there are another dozen fibs to sift through. It's a cumulative thing - whichever side gets the most bullshit to stick will win. And the Remain camp is hardly squeaky clean on this front either.

Does anybody pay the slightest attention to morons like Mordaunt?

As for "Sky News political editor Faisal Islam"......He's the saddest sight even in Brit "news"......A Murdoch shill, nothing more. No credibility whatever.

"Turkey will join the EU" has been the lead headline everywhere and all day. It doesn't matter that it's not true, it's in people's minds, and we're not going to beat it with a few indignant tweets and - sorry - a Zelo St article.

I do think the Erdogan regime is toxic, connives at Islamic State activities and denies justice to the Kurds and others. But surely the "Atlanticists" in the Vote Leave in particular only want to strengthen Turkey, Saudi Arabia, Qatar and whatever the rest of them are called with their support for nato (which I think Turkey should be unceremoniously booted out of given that it's a rogue state) and love of American neocons?

Perhaps Britain out of the EU and President Killary would be the worst of them all, after the relative sanity of the Obama years a full swing towards another illegal war against Assad, with the support of Turkey and the Gulf states,

La Penny all now looking a bit of an uncomfortable stinker.

With the Outers referendum broadcast yesterday evening banging on about Turkey, Sunday's outing does look rather like a bit of deliberate stage-management.

Leave. Where the lies don't matter as long as it's all spelt right.