After the decision was taken to allow Police forces around the country to use their discretion in allowing an extension to the 12 month rule, the Tory Party’s election expenses scandal was effectively given the green light to rumble on, not helped by the characteristically slippery performance of former co-chairman Grant “Spiv” Shapps when subjected to the inquisition of Andrew Neil on yesterday’s BBC Daily Politics. 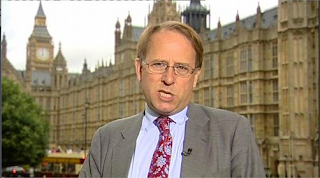 Shapps, despite having personally promoted the Road Trip 2015 campaign, along with its Battle Buses, and despite the image of financial acumen that he had promoted for so long (especially when going under the alias of Michael Green), declared that he wasn’t the person who dealt with the money side of the operation. That was down to someone else, but exactly who that someone else was, he wasn’t going to say.

That was not enough to close out the inevitable appearance of Channel 4 News’ Michael Crick later in the day, who had previously been focusing mainly on Shapps’ co-chairman Andrew Feldman. And why Crick had been doing this became crystal clear as what had been suspected for some time was finally admitted: Crick’s source was none other than disgraced ex-Tory activist Mark Clarke, now expelled from the party for life.

This is not a good look for Crick, whose reputation for fearless and non-partisan reporting has now been linked to the person who figures so prominently in the Tory Party’s continuing bullying scandal, following the death of young activist Elliott Johnson. It gets worse: Clarke had already been identified by this blog as being a source for two other media outlets, neither of which enjoys the status of Channel 4 News. 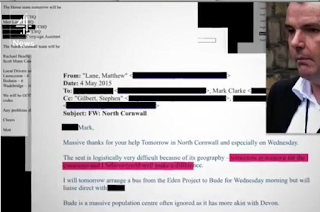 So-called “exclusives” in the Murdoch Sun, authored by the paper’s alleged “Westminster correspondent” Master Harry Cole have contained signed original letters which can only have come from Mark Clarke’s personal correspondence. Cole has claimed to have fallen out with Clarke, which has been shown not to be true. And it gets even worse.

Yesterday afternoon, the perpetually thirsty Paul Staines and his rabble at the Guido Fawkes blog told their readers “Looks like the curse of Mark Clarke has hit a wall despite his best efforts in briefing Michael Crick”. Clarke has been close to the Fawkes mob and was on the guest list for their tenth anniversary bash in late 2014, where Staines and Cole cemented their position as establishment crawlers.

All of which means that Michael Crick and Channel 4 News are associating with the same kinds of people as the Murdoch Sun and the Guido Fawkes blog, and as a result going over much of the same ground. Perhaps that is why Grant Shapps had previously had a relatively easy time from Crick - after all, Shapps was Clarke’s pal too.

There is probably good reason to go after the Tories’ election expense régime. But it has to be stressed that Mark Clarke has good reason to deflect attention from the party’s bullying scandal. That alone should have caused Crick to exercise caution.
Posted by Tim Fenton at 10:28

Neil had to go after Shapps because even by Shapps' own moronic light he had turned toxic. The sooner the tories were rid of him the better for them. That's Neil's "job." It has nothing to do with genuine investigative journalism. Neil is a fully paid up card-carrying member of the far right neocon gang in broadcast media.

Crick? Wouldn't trust him and his phony accent beyond my peripheral vision. A tenth rate messenger boy comprised of a single toned jeer. C4 News actually gets worse as privatisation draws nearer by the day and redundancy fear begins to permeate their newsroom.

It asks interesting questions about both Coles and Staines journalism. Presumably both were offered the same access to the Clarke emails as Crick,Presumably Clarke is hawking those letters around as a demonstration of his ability to cause damage, or in a final hissy fit after his expulsion and yet somehow they both manage to mainly miss something that is politically damaging, or not push the story.

Ok the source is iffy, and is providing information for his own reasons, but what source isn't? Standing the story up can only have been confirmed through searching the electoral commission databases, and leg(or phone) work hitting the hotels and bus companies involved

Clarke is indeed a source to be dealt with carefully. The truth around the awful death of EJ needs to be out for his parents sake (and wishes) alone. However, neither of those should preclude Tory election expenses questions from being investigated. A source is a source, how this is verified and checked becomes the basis to the story.
Currently no big issues with it from this armchair.