After it was revealed that the much-delayed and long-awaited report from the Iraq Inquiry, otherwise known as the Chilcot Report, would be published soon after next month’s EU referendum, the hunt has been on within the Fourth Estate to get a clue as to what will be revealed by its publication so long after the events into which it was inquiring. Today, the Murdoch Sunday Times claimed to have the inside track. 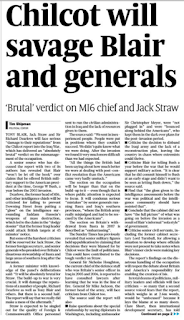 And there it was on the front page, under the by-line of political editor Tim Shipman: “Chilcot will savage Blair and generals … ‘Brutal’ verdict on MI6 chief and Jack Straw”. This, by the most fortunate of coincidences, is all that Don Rupioni could wish: Blair, with whom he has fallen out, getting it in the neck, along with reliably slippery Straw, and the collateral damage including people who are not the press who wanted the war.

In other words, it is all too neat and uncomplicated. And one read through of Shipman’s article throws up rather more questions than answers. So let’s look at some of those questions, and see how the piece measured up against them.

Some of it is nothing to do with Blair and Straw’s judgment: there is alleged to be “criticism of the decision to disband the Iraqi army and the lack of a reconstruction plan”. Not a great deal that the British Government could do about that.

Some of it we knew many years ago: Chilcot will apparently “conclude that the cabinet did not ‘have the full picture’ of what was going on before the invasion”, and “the gloss given to the intelligence assessments before the war was political”. Blair will allegedly be criticised “for telling [George W] Bush a year before the war that he would support military action”.

All of Shipman’s article is highly dependent on one “senior source”, who “has discussed the report with two of its authors”. That description would fit Shipman’s former colleague James Chapman, who is now Director of Communications for Young Dave’s next door neighbour George Osborne, and who is suspected to be the source for several of Shipman’s recent stories. If he’s the source of this, it should be admitted.

Too much of the article is quotations, presumably from Shipman’s “senior source”. Line them up: “damage to their reputations”, “absolutely brutal", “won’t be let off the hook”, “embarrassing”, “not plugged in”, “bounced along behind the Americans” - along with two major paragraphs in the middle of the piece. So we’re depending on an interpretation of an interpretation, or, as it is usually known, a Delingpole. And, to paraphrase Dubya Bush, you can’t take that to the bank.

We hear from “A former minister with knowledge of the panel’s deliberations”. But we are not told whether this former minister had any involvement, or even if they were in the Labour Party. Hell, it could be Liam Fox, and that would be an instant cred-down-the-pan moment.

Shipman’s article is headline grabbing and looks convincing on the surface. But it falls apart under a little probing. And that’s not good enough - must try harder.
Posted by Tim Fenton at 16:38

Details can be argued over from now till kingdom come.

What is not in doubt is that the New Labour Blair gang lied to Parliament and to the British people. This led to the mass murder of hundreds of thousands of innocents in the Middle East. That makes Blair and his disgusting supporters - including in the "intelligence" services and the Colonel Blimps - war criminals of the worst type. All of them should be arraigned in the International Court and then locked up for the rest of their corrupt, homicidal lives. They are up to their armpits in innocent blood and the destruction of nations. It won't happen of course.

If British journalism had any sort of morality it would be digging up the roots of this evil in the Brit-Yank criminal link up and conspiracy. It won't of course.

Murdoch and his corrupt jobsworths matter only in the sense they ignored warmongering, and in fact supported it with their far right propaganda and tenth rate Little Englander jingoism. No doubt it gives Murdoch's tiny revengeful "mind" something else to hate. The sooner the wizened old Nazi shuffles off this mortal coil the better.

According to Peter Preston in the Observer, Murdoch has given up tweeting since his marriage to Jerry Hall (who presumably married the old bastard as a chance to outdo Jagger by showing him she could be even more avaricious and money-orientated than even he is). Preston puts Murdoch's Twitter silence down to lurve. I suspect that, in fact, he's been dead for weeks having expired shortly after his nuptials when the vasodilatory effects of massive and prolonged but increasingly ineffectual use of Wendy Deng's Viagra Fortune Cookies wedding present finally did for him.