After the Hillsborough inquest verdicts, the subsequent barrage of significantly adverse comment directed at the Murdoch mafiosi over their appalling behaviour at the time of the disaster that took the lives of 96 Liverpool fans, and the equally bad behaviour in keeping those verdicts off their front pages, the inmates of the Baby Shard bunker might have expected a respite. But they were out of luck. 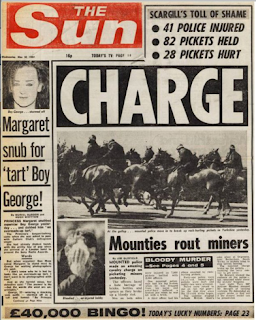 Hard on the heels of the realisation that the South Yorkshire Police had been more than economical with the actualité over Hillsborough came clear signs that they had done something rather similar with the “Battle of Orgreave”, the confrontation between striking miners and Police outside the Orgreave coke works east of Sheffield, which culminated in a mounted Police charge and scores of injuries on both sides.

As with Hillsborough, the Sun, under the less than totally benign editorship of Kelvin McFilth, recycled the Police version as if it were unvarnished truth, and readers were presented with a front page splash (under the byline of Jim Oldfield) proclaiming “Scargill’s Toll Of Shame … 41 Police Injured … 82 Pickets Held … 28 Pickets Hurt … CHARGE … Mounties rout miners”. And there is more. 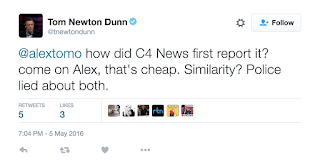 “MOUNTED Police made an amazing cavalry charge on picketing miners yesterday … The officers faced a hate barrage of bricks, bottles and spears as they broke up a bloody riot”. And in case readers still had not got the point, there was a signpost to pages 4 and 5, where they could read all about “Bloody Murder”. Bricks? Bottles? Spears? Riot? There were none of those present, but hey ho. This exercise in creative copy taking did not impress Alex Thomson of Channel 4 News, the man who doorstepped Kel recently.

“First Orgreave, then Hillsborough - The Sun immediately screams the police version of events in June 1984” he observed. This drew an immediate riposte from the Sun’s non-bullying political editor Tom Newton Dunn, who protested “how did C4 News first report it? Come on Alex, that's cheap. Similarity? Police lied about both”.

It got worse: after Imelda Finnerty suggested he was defending the indefensible, Newton Dunn blustered “I'm not defending anything. Simply stating the wider context”. Ms Finnerty had to remind The Great Man that “You are defending The Sun's reports at the time by saying the police lied. Investigatory journalism is mean to ask Qs”. Any competent definition of the word “Journalism” is unlikely to include areas such as “obedient and unquestioning copy-taker for the law enforcement authorities”. 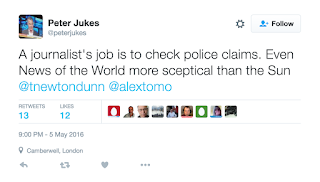 And Peter Jukes had to remind Newton Dunn “A journalist's job is to check police claims. Even News of the World [was] more sceptical than the Sun”. Also the Sun under MacKenzie was grovelingly faithful to Margaret Thatcher, and swaggeringly so after her re-election in 1983. This was just another opportunity to show the paper’s unswerving loyalty. Why anyone should leap to defend it now is both baffling and revealing.

Tom Newton Dunn is already in denial about the shockingly bad past behaviour of his own paper, so much so that he’s already spinning in its defence. Not a good sign.
Posted by Tim Fenton at 16:45

Something crucial to bear in mind also is that Sun-type behaviour does not just give us a contrived false picture, it actually makes the lie much much worse.

Because the lie perpetrator knows it has no editor to convince, that in itself extends the scope.

It is important - and accurate - to realise that The Sun is therefore not just culpable of printing terrible lies, but also is along with the police directly responsible for the despicable severity that lying with free licence is enabled to reach.

According to the Nazi Mackenzie on Hillsborough, he was lied to by a news agency (but which one?), the police and "politicians." The lies he published weren't his fault.

But years earlier he (and Andrew Neil, now BBC TV, then Murdoch jobsworth at the Sunday Times) published the same lies about the miners.

"Funny" enough, some TV news broadcasts of the day also managed to edit footage of miners that showed them "attacking" police - when it was the other way round.

In fact virtually all mainstream media joined in putting the boot into innocent victims. They still do.

I am willing to bet this conspiracy - no other word will do - has roots at the highest levels of government and civil service. The lies could not have been conceived, executed and covered up for this period of time without it.

There is a long, long way to go yet before we even begin to purge this country of the neocon corruption and evil injected into it in 1979. Just watch as mainstream media quickly loses interest in exposing itself and the guilty to democratic truth. As the Scum did the Hillsborough inquest verdict.

Newton Done is nothing but a low level messenger boy and jeer leader. So are his Murdoch "colleague" jobsworths.

Make no mistake, this will take years of honest inquiry. Which automatically excludes the Murdoch-Rothermere Axis of Evil and its employees and apologists.

But where will the honest journalists come from?

I see the tin foil hat brigade are slagging off my mates at the currant bun again.

Can you help me ?

I have been subjected to a fate worse than death.
I have to be positioned in a place that gives a whole new meaning to the term "sausage ring".

What makes it worse is that I'm claustrophobic.

Have a search around the kitchen drawers you should find a roll of tin foil.
Wrap yourself in it and pop yourself in the oven at gas mark 5 for 30 minutes and then make your way to my gaff. I'm starving.

No thanks.
I'm sticking with Hopkins Hoop!