Nothing exemplifies the shocking decline at the Telegraph titles more clearly than this week’s events: on the one hand, the paper had a garden at the Chelsea Flower Show, which was estimated to have cost around half a million pounds, while rather more than that has been slashed from the annual salary bill by the abrupt sacking of ten experienced journalists - with no obvious replacement in sight. 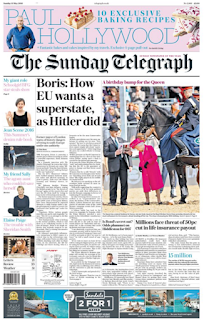 So desperate is CEO Murdoch MacLennan to keep the profits rolling in that he has already rolled over in the face of advertiser displeasure - revenue from this source has fallen across print media by around 20% over the past year - and now staff cuts are being implemented in order to keep wringing money from an asset base that is doing very little more than trading on a fast-disappearing past reputation.

And all the time the rumours swirl regarding the future ownership of the titles, with David and Frederick Barclay, aka The Fabulous Bingo Brothers, apparently ready to sell, providing the price is right. The problem is that the value of the Telegraph brand is falling rapidly as fewer and fewer journalists are worked harder in order to produce more copy, with the quality of the end product falling steadily as a result.

The desperation with which the cost axe is being wielded is clear when the PR spin put out by the Tel is decoded: after telling that the staff canteen was being closed, MacLennan said “Our office is never full and even on a very busy day a large number of desks are unused … With changes in the way we work, and hot-desking for some of those who need to be in the office, we will be able to reduce the size of our footprint”.

More cost-cutting is the reality of that one, as is the idea that the paper will “help startup businesses in the digital space … Some of these exciting new ventures will work alongside us … allowing their expertise and creativity to mix with our experience and own talent for innovative content creation”. More click-bait and cheap copy. And the talk of “flexible working” means one thing: more zero hours contracts and freelancers.

That wielding of the axe has meant “a round of targeted cuts of senior newsroom staff, including the deputy editor, Liz Hunt … feature writer Harry Wallop, head of arts Andrew Pettie, foreign chiefs Richard Spencer and Colin Freeman and Asia editor Philip Sherwell [plus] less senior staff … including Rhiannon Williams, consumer technology writer and reviewer, and a number of support staff including on the picture desk and secretaries”.

So it is that the Telegraph titles are following the path already travelled by the Express and Daily Star under the less than benign ownership of Richard “Dirty” Desmond: rounds of sackings, reliance on cheaper and often poorly-paid freelancers, recycling stories from broadcasters, other papers, or even blogs, with a backdrop of falling advertising revenue and sales, and with no outcome in sight other than ultimate oblivion.

The recent sighting of Rupert Murdoch in the Tel’s newsroom should also not be taken as any sign of hope: all he would want the titles for would be the readership. The papers would soon be closed amid more sackings. That is the reality when the perfect storm of offshore ownership, declining revenues and corporate greed hits. The end.
Posted by Tim Fenton at 10:10

Leaving aside the possible horrors and tragedies of redundancy - if you can - you have to say this is what grovelling compliance leads to when you churn out lying propaganda instead of the truth.

There's black humour in this too. Take this: "...reduce the size of our footprint.” This must take (or steal) the biscuit for the most comical bullshit managerese for throwing people on the scrap heap. You think you've heard it all, then you get that kind of shite.

The redundant workers will now have to fund their ponzi mortgages from another source. They'll also have to come to terms with minimal, if any, public sympathy for their situation. After all, they have betrayed the principles of decent journalism for years.

We are approaching an international situation which will make things worse during coming years, even if we avoid the obvious wars capitalism and its NATO brigands seek with Russia and, eventually, China. Yet still mainstream media and its Winston Smith "journalists" and "presenters" say nothing.

The obvious conclusion may not be imminent. But it's waiting. At this rate few things are more certain.

The tragic thing is......all it took was a little bit of organised courage.

Thirty years ago the Torygraph had the finest, most impartial and detailed foreign news coverage of any paper in the country. Then came Black. Then came the Barclays.

Its now a joke. Its obviously decided its main competitor is the Mail On Line and its front page is filled with gossip and fruity photos of scantily clad slebs. It even seems to be competing for the Graun's female readership, with loads of stories written by self-proclaimed "feminists."

Keep up the good work. We might think things are bad in our line of trenches, but they're a hell of a lot worse on the other side. They've run out of ideas, of conviction (hysteria is not conviction), and coherence. Both sides of the EU campaign are a farce and no one is listening. Let's hope they don't blow the world up before we get rid of them.