With impeccable timing – just before the polls in the US for President, the House of Representatives and a third of the Senate – Venezuela has gone to the polls, and incumbent President Hugo Chávez has emerged victorious with 54.4% of the popular vote, against 44.9% for challenger Henrique Capriles. The electoral system there has on many occasions been declared free and fair. 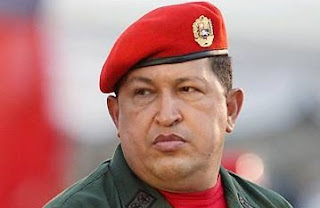 Yep, look out to your right

So it should be no surprise at all that right-wingers have emerged to denounce the result as anything but. The reasons for this are many and varied: Augusto Pinochet is asserted to have stood aside earlier, but he was actually in power for over 16 years, and with no chance for Chileans to vote on the matter. The election is held to have been fixed, but the only evidence is nudges and winks.

The more moderate disapproval was shown by the Daily Mail, which sniffily observed that Chávez had in his favour “a legacy of putting Venezuela's poor first with generous social welfare programs”. Terrible, eh? And the Mail seems not to like “preferential oil deals with allies such as Cuba”, which is their business. The Mail fails to mention the largest oil deal made by Venezuela – with China.

That, and the drive to make policy independently of Washington DC, is behind the rampant anti-Chávez sentiment, such as the Murdoch owned Wall Street Journal, which calls Chávez a “dictator”, states that the result was achieved by fraud, and infers that the electoral roll was rigged. And our friends at the routinely dishonest Commentator are also deeply unhappy with the situation.

There, Joel Hirst likens challenger Capriles to Paul Ryan – “Chavez is old, overweight and sick; Capriles is 40 years old and a marathon runner” – and refers to Venezuela’s “destroyed democracy”. He pretends that Chávez has lost three of the last four elections, and cites the Heritage Foundation in his support. Then he, too, makes dictatorship comparisons.

But the US Library of Congress (the paper is also linked from the CIA World Factbook) states unequivocally that “Free and fair elections have been held regularly since 1958”. Former US President Jimmy Carter has said that “As a matter of fact, of the 92 elections that we've monitored, I would say that the election process in Venezuela is the best in the world”. The “we” is the Carter Center.

Turnout in the Venezuelan election was just over 80.4%, with voter registration running at around 97% of the electorate, figures that put the USA (and, whisper it quietly, the UK) to shame. The problem for Hugo Chávez is that not doing what Washington wants you to do is a shortcut to permanent demonisation. Sometimes it is hard to accept that democracy might not give the result others might want.

Fortunately the USA has got over the kind of action they took in Chile in 1973.
Posted by Tim Fenton at 18:07

>But the US Library of Congress (the paper is also linked from the CIA World Factbook) states unequivocally that “Free and fair elections have been held regularly since 1958”.

Not sure if you are spinning or missed a trick there.

That study is from 1990 so says nothing about Chavez elections.

The CIA World Factbook has nothing more recent. Had there been an end to free and fair elections, there certainly would have been.

So it's safe to assume that there has been no change to the situation. Also see Jimmy Carter's comments.