Once again, the lack of editorial oversight at the Desmond flagship Express has brought a priceless string of gaffes, this time over the apparently straightforward task of copying a press release. How hard can that be? Well, for Emily Fox and whoever wrote the headline for her piece advertising the upcoming film Iron Man 3, it seems that the task was so challenging that the gremlins crept in. 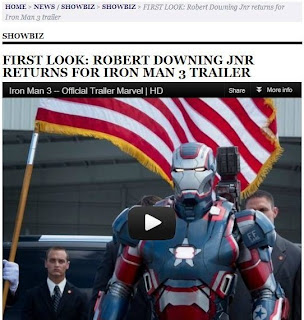 Take that headline, for starters. “First Look: Robert Downing Jnr Returns For Iron Man 3 Trailer”. Robert Downing Jnr? Who he? And why is he only in the trailer? Does someone else get to star in the film? And the styling of Robert Downey Jnr as Robert Downing has also crept into the body of the article, although further on he gets indentified correctly. 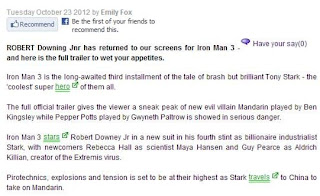 And, folks, he’s in “a new suit”. Doesn’t quite convey what’s going on, does it? And, as the man said, there’s more: the full trailer is “to wet [sic] your appetites”. The trailer gives a “sneak peak [sic]”, and moreover, Gwyneth Paltrow is “showed [sic] in serious danger”. Can’t Dirty Des and his minions afford a spoiling chucker and someone who understands the word “grammar”?

You think that’s all the howlers in this piece? No it isn’t: readers are also told that “Pirotechnics [sic], explosions and tension is set to be at their highest”. This must be the lamest slice of Express rubbish since, er, the last lamest slice of Express rubbish. And the lamest until the next one. But, hey, it’s making a profit and keeping Des in the style to which he has become accustomed.

And we know what that means: another Benchmark Of Excellence.
Posted by Tim Fenton at 12:53