Thanks to the good offices of the Independent Parliamentary Standards Authority (IPSA), it’s possible to examine the expenses of your MP – or, indeed, any MP. So in the wake of Ticketgate, Zelo Street has been examining the rail travel claims of the Rt Hon Gideon George Oliver Osborne, heir to the Seventeenth Baronet. His details for 2010-11 and 2011-12 are available for scrutiny online. 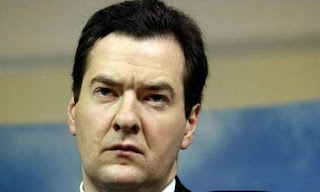 Most of the journeys are to and from London Euston, with a few northbound ones beginning at Milton Keynes Central (perhaps the Chancellor had been visiting Chequers). The most frequently used northern endpoint is Macclesfield, this enjoying a more frequent London service than Wilmslow, although the latter is in Osborne’s Tatton constituency. Occasionally he travelled to or from Crewe. 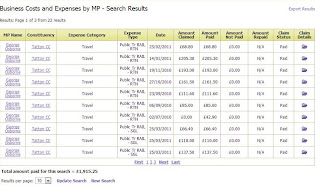 The ever-changing – and expanding – array of book-ahead fares makes for a variety of amounts claimed, but one thing is consistent: according to the details – for every one of these journeys – all of the tickets purchased and claimed for were for travel in standard class. Every last one of them. A few were “Anytime” or open tickets, and some were “Off-Peak”, open tickets not usable at peak weekday times. 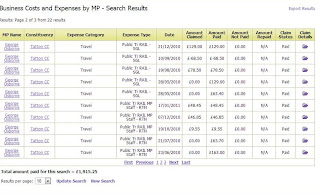 The remainder were book-ahead tickets valid only on specific trains. The dates shown are the date on which the ticket was purchased: therefore, the journey Osborne made on May 28, 2011 – where he was seen trying to blag his way into First Class – shows in the expenses as May 26, this being the purchase date. The cost - £137.50 – indicates an “Anytime” single fare. 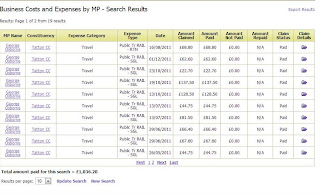 Sometimes there is a combination of ticket types: the January 14, 2011 return fare of £205.30 will have been made up of an “Anytime” single at £137.50 and an “Off-Peak” single at £67.80. But these are, one has to say it again, all standard class fares. They appear to have been booked through an agency – clearly, Osborne is used to having a chap to do that sort of thing – so it isn’t an accident. 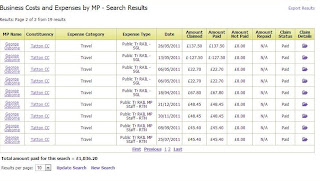 Think about that for a minute, and then consider what ITV’s Rachel Townsend said about last Friday’s incident: “his aide approached the ticket collector right next to me. He said he is travelling with George and he has a standard ticket but can he remain in first class? The guard said no. The aide said Osborne couldn't possibly sit in standard class. The guard replied saying if he wants to stay it's £160. The aide said he couldn't pay and he couldn't really sit in standard. The guard refused to budge. The guard went on gathering tickets and later told me Osborne had agreed to cough up the £160”. 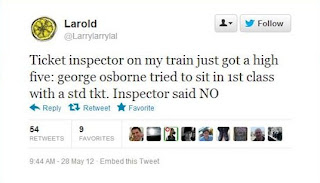 Osborne “couldn’t possibly sit in standard class”. The claim of “can’t pay”, followed by paying up, has all the hallmarks of blagging. He was caught trying it on last May. And he always buys a standard class ticket. Something about this business smells very ripe indeed. Enquiries are continuing, and I hope to have more soon.
Posted by Tim Fenton at 17:44

I am not an Osborne supporter by any stretch - but is it possible that he pays and claims for the standard ticket (taxpayer money), but the upgrade comes out of his own pocket.... as and when the guards insist, that is?

the guard shouldn't have to insist - if osborne wants to travel first class, he should volunteer the extra (or just buy 1st class before departure). If i tried this i would be charged and fined - osborne should be as well. he is a sponger.

IWC just 'being' George Osborne must save him quite a bit.
There must be at least some ticket collectors who would prefer not to butt heads with somebody so, er, important.