You read that title right: across the North Atlantic, where political discourse can become yet more polarised than in the UK, one well known right-wing pundit has said, more or less, that it’s OK to call those she (yes, she) considers her opponents retards. That is, of course, provided that they aren’t actually retards. Welcome to world of the increasingly scary looking Ann Coulter. 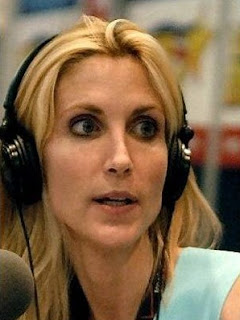 Annie has once again got herself some attention – and the thought does occasionally occur that this is the only reason she makes her, shall we say, more controversial remarks – for Tweeting after the third and final Presidential debate that “I highly approve of Romney’s decision to be kind and gentle to the retard”, thus calling the President of the USA a retard.

A member of the US Paralympic team, John Franklin Stephens, who has Down’s Syndrome, responded with an open letter to Ms Coulter, which started “Come on Ms. Coulter, you aren’t dumb and you aren’t shallow.  So why are you continually using a word like the R-word as an insult?”. To date, she has not directly replied, and nor has she shown any sign of backing down or promising not to repeat the slur.

In fact, Ms Coulter went on Alan Colmes’ radio show (brought to you by Fox News (fair and balanced my arse)), and explained herself thus: “Look, no one would refer to a Down Syndrome child, someone with an actual mental handicap, by saying ‘retard.’ Where do you think the words ‘imbecile,’ ‘idiot,’ ‘moron,’ ‘cretin’ come from? These were all technical terms at one time. ‘Retard’ had been used colloquially to just mean ‘loser’ for 30 years”.

While you’re mulling that one over, here’s how she responded to Stephens: “It would be one thing if I said in my tweet a joke about Special Olympics, a joke about Down Syndrome ... No one would call someone with Down Syndrome ‘retard.’ I call you a ‘retard'”. Colmes then pressed her further.

He put it to her that some consider “retard” as bad as the N-word, but Annie was having none of it: such people were just “word police”, for whom she had a special message. “Oh, screw them ... That’s what they feel I do? I feel they’re being authoritarian bullying victims”. So remember, folks, you can’t call a right winger out for calling someone a “retard”, because that makes you a “bullying victim”.

Yes, Ann Coulter is a blowhard, an unrepentant right-leaning rabble-rouser, and an appalling attention seeker. But she is also one of the darlings of the New Conservatism which is crossing the ocean and worming its way into the Tory Party. What Annie spouts today is highly likely to find its way into the vocabulary of the otherwise vacant and clueless tomorrow.

So watch out for right-wingers pretending that it’s OK to call opponents “retards”.
Posted by Tim Fenton at 19:21