Jimmy Savile And The Press

The News Of The World, under the editorship of the twinkle-toed yet domestically combative Rebekah Wade (now Brooks), championed the cause of Sara Payne, whose daughter Sarah had been killed by a predatory paedophile. This showed that the Screws, and indeed the Fourth Estate as a whole, really cared about those whose stories featured in its pages, and not merely about sales. 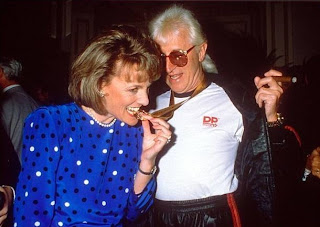 Yes, they all kept quiet. Including her

But when the Screws’ “naming and shaming” ended up with a paediatrician having her house vandalised, and an innocent family man getting a brick through his front window, Ms Wade and her pals went quiet. And then we found out that the Screws had been hacking Sara Payne’s phone – the one they gave her. It was still just about sales: the cynicism and hypocrisy were breathtaking.

So it has been with the rush to make a few quid out of the, shall we say, exploits of the late Jimmy Savile. He had been rumoured to have an unhealthy interest in under-age girls for many years, but nobody had come forward and many across the media – yes, the whole of it – were loath to jump to conclusions while the DJ and host was raising hundreds of thousands of pounds for charity.

Now all is changed as allegations ranging from molestation to rape have been made. This has given the papers two heaven sent opportunities: first, to scream “paedo” and frighten readers into buying what anyone with a laptop already knew, and second, an excuse to dump Savile’s behaviour on the hated BBC. That there were no formal complaints made to them during his lifetime is not allowed to enter.

Sadly, not all the attacks are of a particularly coherent nature: the Telegraph’s Damian Thompson illustrates his rant at the Beeb with a photo of Savile wearing a Yorkshire TV tie and appearing on Calendar, which was, er, on ITV. Trevor Kavanagh at the Sun calls Savile a “wrinkly old fraud”, showing that age does not always bring wisdom to the process of quote selection.

Both assert that the whole business is a “BBC cover-up”. After all, BBC bosses had “heard rumours”. Yes, organisations should base their judgments on who to hire and fire based on rumour. The Mail, which will no doubt be returning to the subject, suggests “BBC bosses hushed up Savile’s abuse”. But if nobody came forward, what was there to hush up? You’ve no evidence, you go nowhere.

For a more reasoned take on the whole business, we have to look back at the Tel and a post from Mic Wright, who pores over the apparently widespread exploitation of young girls in the pop culture of the 1960s and 70s. Where was the Fourth Estate then? If they knew, they too accepted it in the same way that they now accuse the BBC of doing. But now Savile is dead, and there is a need to sell more papers.

So the tabloids claim once more that they care. No change there, then.
Posted by Tim Fenton at 17:16

SAVILE: Freemason and member of the Knights of Malta. Tip of the fucking iceberg.

WAKE THE FUCK UP.

"There is no such thing, at this date of the world's history, in America, as an independent press. You know it and I know it. There is not one of you who dares to write your honest opinions, and if you did, you know beforehand that it will never appear in print. I am paid weekly for keeping my honest opinions out of the paper I am connected with. Others of you are paid similar salaries for similar things, and any of you who would be so foolish as to write honest opinions would be out on the streets looking for another job. If I allowed my honest opinions to appear in one issue of my paper, before twenty-four hours my occupation would be gone. The business of the journalist is to destroy the truth; to lie outright; to pervert; to vilify; to fawn at the feet of Mammon, and to sell his country and his race for his daily bread. You know it and I know it and what folly is this toasting an independent press? We are the tools and vassals for rich men behind the scenes. We are the jumping jacks, they pull the strings and we dance. Our talents, our possibilities and our lives are the property of other men. We are intellectual prostitutes." - John Swinton, former Chief of Staff of the New York Times, called by his peers "The Dean of his profession", was asked in 1953 to give a toast before the New York Press Club

Same worldwide, especially in the UK.

Much worse now that the Khazar-Jews control AP, Reuters and nearly all the major global media from newspapers, TV, internet, entertainment, publishing houses, education, etc. And of course they have TOTAL control of the World's credit and money supplies.