Charles And The Delingpole Paranoia

The miraculous discovery has been made recently that Prince Charles likes to write to Government ministers and the BBC. Wow. Who knew? Heck, everyone did, and unlike other recent revelations involving the Corporation, this was not merely a rumour but a well known fact, which was often discussed in the comment columns and regularly on broadcast media. 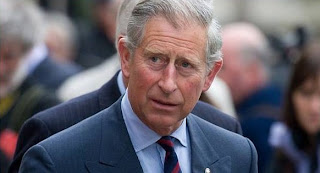 It's that Delingpole fellow again ... and I have to say he's, erm, infinitely more ghastly than that Nicholas Witchell from one's BBC

What of course wasn’t known was what Charles said in his correspondence, or equally what HMG or the Beeb said in reply. This, as the Telegraph has helpfully pointed out, is because the Royal Family was not regarded as a “public body” for the purposes of the Freedom of Information (FoI) act, and so one’s missives did not have to be revealed to one’s subjects, and remained confidential to one.

There was also a public interest test, and here it becomes a bit of a minefield: there is a difference between Charles being knowledgeable about the business of Government – as he will have to be one day – and lobbying. The subsequent scrap over whether the lower orders can see what one is corresponding over with one’s Government is firmly to do with the latter.

And, as Attorney General Dominic Grieve has now ruled, one’s letters are going to remain one’s secret, because the contents would “seriously damage” his future role as King. Er, in what way? If he’s just asking after information on the workings of Government, that wouldn’t be a problem. The thought enters that Charles has been taking a blatantly political stand in his correspondence. 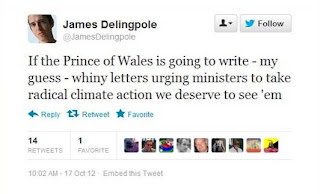 However – and there is inevitably a however in these cases – it is not known on what subject the political position has been taken. So into the vacuum is poured the usual uninformed speculation, in the vanguard of which has been James “saviour of Western civilisation” Delingpole, who has decided that Charles has written “whiny letters urging ministers to take radical climate action”.

Why so? Simples. Del Boy is frightened by the prospect of a greener energy policy. He can’t see the correspondence. Charles is supposed to be a bit of a greenie. Therefore the correspondence he can’t see has to be about that. And it’s not fair. And so he’s going to write an awfully funny blog post about it. Which will have his greatest devotees (Sid and Doris Bonkers) in fits of laughter. Or fits of something.

And so it came to pass: Del wrote his post, “Why the Prince of Wales’s letters shouldn’t be kept secret”, suggesting that Charles was lobbying Young Dave directly. Great fun for Del, but doubtful: HRH would go directly to the relevant minister or Permanent Secretary. And past form suggests he’s more hot on matters architectural first, the Duchy of Cornwall next, and anything else is a very distant third.

But that’s what happens when you don’t bother researching. No change there, Del.
Posted by Tim Fenton at 17:47