Boris And The Churchill Comparison

The Tory Party Conference played host to London’s occasional Mayor Alexander Boris de Pfeffel Johnson yesterday, and the faithful lapped it up. Bozza did his usual what-ho turn, pretending to be no more than an amiable buffoon while all the time knowing that he had rehearsed every supposed ad-lib. And, as ever, he managed not to let anyone know where he stood about anything. 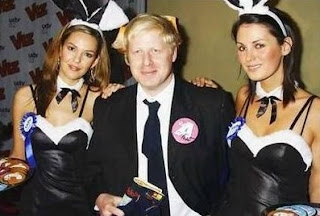 Thus the Tory faithful (and, whisper it quietly, the wider Conservative Movement) was able to project its own views, prejudices and aspirations onto Bozza, mostly mistakenly believing that his cause was their cause too. But the Johnson message, like those of the Bible, Karl Marx, and John Maynard Keynes, is deeply ambiguous: this helps win converts to the cause.

But it didn’t convince those who have encountered the Blond over the years, and especially not Max “Hitler” Hastings, self-styled liberator of Port Stanley and former editor of the Telegraph and Standard, who employed Bozza many years ago. Hastings, who was born the year the Second World War ended, compares Johnson today with politicians who began their careers at that time.

And in all the cases he mentions – Roy Jenkins, Ted Heath, Denis Healey and Iain Macleod – Bozza comes up woefully short. All were men who went into politics to make a difference, and who believed in something. All had served their country in the war. Johnson, as Hastings points out, gives every impression of not believing in anything, other than Himself Personally Now.

Yet the modern cult of personality propels him ever onwards and upwards. Perhaps we can get an idea of what Bozza is about by looking at those past figures he admires? Well, one that leaps off the page is Churchill. Tories like to summon up the figure of Winshton when it suits their purpose, but not many would make him their number one inspiration, and it is not difficult to see why.

Churchill, like Johnson, was appallingly disloyal when it suited him: he was the only man who disproved the dictum of his old colleague David Lloyd George that “a man can rat, but he cannot re-rat”. Winshton crossed the floor of the Commons not once, but twice. He is nowadays thought of as a Tory first and foremost, but he sat in the cabinet that approved Lloyd George’s “peoples’ budget”.

Moreover, Churchill was far too ready to give in to his advisors, while not bothering to grasp the detail of his task, or the implications of his actions. Hence, as Chancellor, he took Sterling back on to the gold standard in 1925 and effectively priced the UK’s manufacturing industry out of much of its export market at a time when its competitors in Europe were just getting back on their feet.

Boris Johnson is a worrying prospect. His regard for Churchill underscores this.
Posted by Tim Fenton at 10:59