As if anyone needed to know, the obedient hackery of the legendarily foul mouthed Paul Dacre has confirmed that the Mail – and other titles – are interested not in the potential victims of Jimmy Savile’s activities over a 40 year period, but instead are using the recent revelations as a deliberate and cynical way of putting the boot into the BBC, with a side order of rubbishing the Leveson Inquiry. 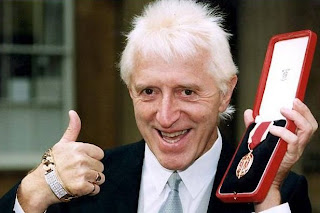 A knighthood from Margaret Thatcher, and they're still keeping quiet about that

And yesterday brought clear proof, with a headline concluding “Police launch hunt for BBC child abuse accomplices”. In case you didn’t get the message, that’s “BBC child abuse”. This has been reinforced with a leader in today’s Mail, where readers are told that phone hacking is “a footling matter ... compared to the molestation and rape of 13-year old girls”. Again the assumption of deliberate BBC involvement.

And all the while the line is spun that “we couldn’t publish because he would have sued”. Well, as I’ve already observed, the threat of being sued didn’t stop the Mail libelling a whole slew of slebs during the recent past, and if we’re talking waiting until the bloke was dead, the Mail and all the other Beeb kickers fare no better there – with one notable exception.

When Savile died, the Mail’s coverage was effusive: “Jim’s grave with a view ... broadcasting legend”. He was dead, he wouldn’t sue, but all that Dacre and his attack dogs could muster was a grovelling tribute. Like all the others, the Mail said nothing until a year later. The Sun called him a “telly legend” and had him pictured with two Page Three Girls. They too said nothing for a year.

But today the same Sun is in full cry: “Paedo ... pervert ... BBC star”. As Sir Sean nearly said, I think we got the point. The idea that they were constrained until Savile passed is bullshit. And the paper that merited an honourable mention? Not a red top, or even a mid-market tabloid, but the Telegraph, whose obituary described Savile as “powerful and mysterious”, and then went further.

“Rumours of under-age sex circulated for some years, although ... no allegations of impropriety ever appeared in print”. The Tel goes as far as it can – because there was nothing more known at the time. And it stayed that way because the press didn’t bother pursuing the matter, until, that is, the Beeb’s own Newsnight, and ITV. Not even the Daily Mail, the UK’s best resourced newspaper.

Yet now that same paper is trying not only to airbrush from recent history its own failure to investigate, but also use the story as another excuse for its editor to pursue his angry and irrational obsession with the BBC, while attempting to devalue anything coming out of the Leveson Inquiry, the sole reason for which is that Dacre is frightened of being shut out of the future of newspaper regulation.

Dacre wasn’t bothered about the victims. He still isn’t. What a stinking hypocrite.

[UPDATE 1330 hours: Brian Cathcart of Hacked Off has also found adversely upon Dacre's wish to play both sides of the field. As he rightly points out, Leveson's remit is "the press", although the Mail editorial deliberately and dishonestly changes this in the retelling to be "the media" so it can once more kick the BBC.

All that the Mail leader shows is that it is not only the authentic word of the Vagina Monologue, but also that he will cling to the very last to his ability to influence press regulation. The idea of his being shut out of that process scares and angers Paul Dacre in equal measure]
Posted by Tim Fenton at 10:55

Tory MP David Lidington has used the Savile affair for a bit of Beeb and public sector bashing. He's also asked for an inquiry at Stoke Mandeville as to how Savile could get away with his alleged behaviour. Given Savile's chumminess with the Thatchers allegations of protection from high places could seriously backfire on ambitious but thick Tories.

What about the paedophiles within St John ambulance who are about to receive awards from the Queen's representative:
http://bit.ly/ourNZexperience