There’s no faulting Spectator editor Fraser Nelson for being an ostensibly agreeable bloke, nor for his unshakeable belief that HIV doesn’t cause AIDS, or that man made climate change is not happening. He even occasionally makes sound decisions, as when he dispensed with the services of Melanie “not just Barking but halfway to Upminster” Phillips, after she landed the Speccy with a five-figure legal bill. 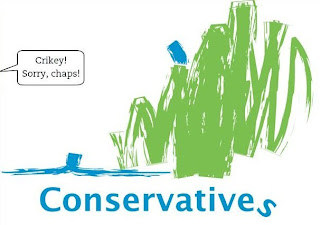 But all this pales into insignificance when put alongside his apparent descent into rank paranoia with a piece in the Maily Telegraph titled “Gordon Brown’s secret army could defeat the Coalition’s welfare and education reforms”. Who they? Well, Nelson claims that dastardly Pa Broon stuffed quangos, charities and the Civil Service with his placemen so that his work would carry on.

This argument is then undermined as he quotes the so-called Taxpayers’ Alliance (TPA) and the Institute for Economic Affairs (IEA), not exactly the most neutral observers of the body politic, and then inserts a photo of Iain Duncan Smith, whose DWP Special Advisor (SpAd) is Susie Squire, who certainly isn’t a Labour plant but came from ... the TPA!

Moreover, Nelson keeps on quoting appointments that have been made since May 2010, but how Pa Broon can have continued to influence matters even after his departure from Downing Street is a mystifying one. Perhaps he has a white cat to sit on his lap while his all-powerful organisation bends the mind of the legislature to his iron will. But, on second thoughts, maybe he doesn’t.

What Nelson does do is assume the ideas put forward by fringe groups devoid of expertise are somehow right, and that to oppose them makes whoever does so a rotten leftie. This covers the shale gas issue, which has now become a touchstone for whether a chap is sufficiently conservative. Economics and environmental concerns need not enter.

He singles out Education Secretary Michael “Oiky” Gove for having “spent three years building a list of outside allies”, but all that Gove has done is to butter up the Murdoch press and those who are of a mind to make a fast buck out of education. The rest has been accomplished by dog-whistling that part of the Fourth Estate who never went near a state school, but know everything about them.

What Nelson cannot bring himself to do is admit that the right-leaning part of the Coalition is all too easily persuaded by the ideologically driven, whose ideas fail when held up to the real world. He talks of a “battle of ideas”, but this isn’t about ideas, it’s about fringe lobby groups being the tail that wags the Tory dog. Young Dave isn’t being scuppered by a secret army of lefties, but by hard reality.

Blaming someone who’s been out of power for two and a half years is just daft.
Posted by Tim Fenton at 18:09

The thing that struck me was the claim of "infiltration" of charities, after The Atlantic Bridge "charity" joke, 'e's 'avin a larf.

Now this was the "charity" set up by Liam Fox, which had loads of Republican and Conservative members in 'Advisory Councils' on both sides of the Atlantic that was supported by fellow Torygraph writer Nile Gardiner, (who pulled up Andy Burnham over "anti-Americanism" when he was in Health (around the same time as Dan Hannan was in the USA doing the rounds, saying Labour were "anti-American" and bitching about how bad the NHS was..)

Andy Burnham had correctly seen what the Atlantic Bridge were up to on the health front) was attacked by Mr Gardiner, who supported the aims of the neocon Atlantic Bridge to the extent that he shared a platform with Liam Fox at a Heritage Foundation event.

Why do those "on the left" call it "The Torygraph" again?