With party conference season in full swing, Rupe and his troops might have thought that Phonehackgate would take a back seat for a few weeks. But the lifting of reporting restrictions today on a case where a senior Police officer has been charged with breaking the Official Secrets Act has changed all that. The activities of those at the now defunct Screws are once again back in the spotlight. 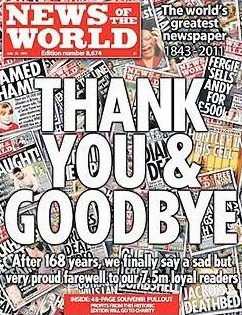 What makes this case stand out is that DCI April Casburn, who has been charged additionally with “misconduct in a public office” back in September 2010, was not some rank and file copper. She had been, according to the deeply subversive Guardian, “head of the National Terrorist Financial Investigation Unit which supports some of the most sensitive police inquiries”.

Have a think about that: a Detective Chief Inspector from the counter-terrorism branch stands accused of offering documents to the Screws, apparently in exchange for money, and it has been alleged she had secret documents at home without having obtained permission to keep them there. The documents are apparently to do with Operation Varec, which precluded Operation Weeting.

Varec – and my thanks here to the excellent Brown Moses blog – began as a following up of assertions by a team from the New York Times that Andy Coulson knew more about Phonehackgate than he was letting on. So it appears that the officer concerned was offering the Screws information about the Police investigation into, well, the Screws.

Varec was intended to provide information to support the decision as to whether the Police investigation into phone hacking and tapping should be reopened (it will be recalled that Yates Of The Yard had earlier summarily decided not to proceed, despite the Met sitting on Glenn Mulcaire’s rather large pile of singularly incriminating evidence). Telling the Screws about that is a more than eyebrow raising prospect.

What is also eyebrow raising is that the conclusions from Varec, having been referred to the Crown Prosecution Service (CPS), appear to have resulted in the decision not to proceed due to there being insufficient evidence. Think about that one: the Mulcaire notebooks alone were more than enough to proceed. And that conclusion came after the Screws was tipped off.

So was the contact with the Screws just a one-way thing? Or did the Murdochs exert some influence on the Met in order to get them to tone down what was sent to the CPS? As with the idea of there being “one rogue reporter”, the idea that April Casburn was acting alone while her colleagues were all white as the driven snow defies belief. Does it stink, or does it stink? Either way, it stinks.
Posted by Tim Fenton at 17:48

Varec is some kind of pressure relief valve. The people who invent these names obviously have a great sense of humour.

I have to wonder whether Casburn was acting on her own in this? Did NI approach her for information? Did someone else in the Met suggest that she tip-off NI that this time the Met were taking things seriously?

Same time at Wolfson as DCI Michael Forteath of SO15. (he started work just 4 days before 7/7 in the anti-terrorist branch.
http://www.julyseventh.co.uk/j7-jean-charles-de-menezes-inquest/de-menezes-inquest-transcripts/sep_30.pdf