Crude Europhobia from the empire of Richard “Dirty” Desmond is nothing new, but the unwitting stars of today’s steaming pile – courtesy once again of deputy political editor Alison Little – are those commenting on the piece, demonstrating that a little knowledge is not just dangerous, but a source of laugh-out-loud entertainment. 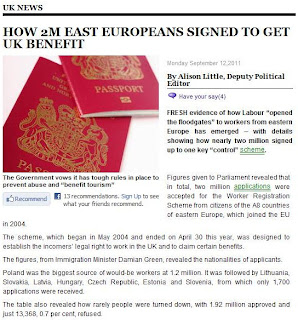 The whistle is sounded ...

The combined smear and frightener is down to the usual standard: “How 2M East Europeans Signed To Get UK Benefit” screams the headline. So the average Express reader now believes that two million people from eastern Europe have signed on, and are in receipt of some kind of benefit.

Thus the intention, but what those two million represent are those who applied to the Worker Registration Scheme for what are called the “A8 countries”, and were subsequently accepted. Whether all those concerned actually came to the UK is not known, and the Express won’t be telling its readers.

Instead, Little tells that “Previous research has suggested how even the high figures on the scheme will significantly underestimate total immigration”, but who did that research, and when, she isn’t going to tell you. Because it doesn’t fit the agenda, and in any case, she just made that up.

Because what is on the agenda is benefits: “Since May 1, A8 nationals have had the same access to our labour market and benefits [my emphasis] as those from other EU countries” tells Little, after earlier mentioning their potential access to tax credits, housing and council tax benefits. 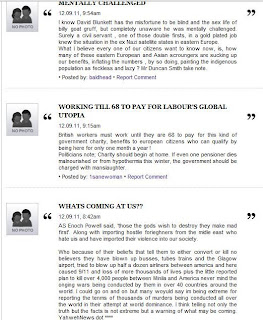 ... and the slobbering dogs come running

Those passing comment know exactly how to respond, and the frothing and ranting is a sight to behold: the first shows a remarkably flexible view of history by asserting “Surely a Civil Servant, one of those double firsts, in a gold plated job knew the situation in the ex Nazi satellite states in eastern Europe”.

Then he loses it completely: “how many of these eastern European and Asian scroungers are sucking up our benefits?” he demands. Another contributor observes “British workers must work until they are 68 to pay for this kind of Government charity, benefits to European citizens ...” without realising she is a European citizen.

But the third of these commenters has truly gone beyond Barking and is about to override the buffer stops at Upminster: “importing hostile forieghners [sic] from the midle [sic] east who hate uis [sic] and have imported their violence into our society ... who because of their beliefs that tell them to either convert or kill no believers they have blown up busses [sic], tubes [sic] trains and the Glasgow airport”.

Citizens of Crewe be warned: there are strange things going on at those Polish delis on Chester Bridge. Be afraid – be very afraid. Because Des says so.

As you'd well imagine, the real figure for the number of approved applicants to the Worker Registration Scheme seems a bit lower than 2 million - at 1,134,711.

I'm having a bit of a dig now to find out the real numbers.

Nope, found it - total is closer to the Express number Written Answers for 6 SDeptember

As usual though, this is not broken down to show how many left the country.

Ta for the research. The Express of course doesn't say how many have claimed benefit, which suggests the number is so small that it might cause embarrassment at Desmond Towers.