The Future Of Streetscape?

Roadworks have occupied Exhibition Road in London’s Knightsbridge for a while now, and will continue to do so until next year. But, so what? Well, the object here is to produce a new kind of streetscape: the present pavements, with their raised kerbs, have already gone, and the intention is to produce an environment where pedestrians have more space. 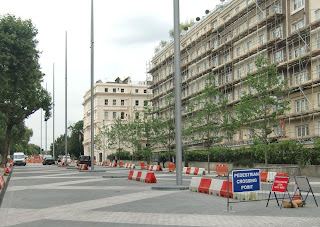 Road vehicles are already limited to 20mph, and this lower speed limit will become permanent when the work is completed. Pedestrians will have more of the surface area, though how those temporary crossing points will translate into permanent ones will be interesting to see. And experience here in Crewe suggests that 20mph limits without some enforcement are not universally respected, whether or not the young and otherwise vulnerable are present. 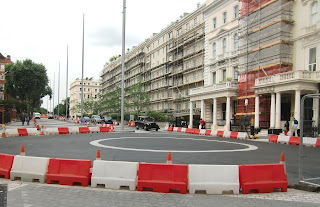 And just how this “roundabout” (at the junction with Prince Consort Road) fits in with the intended traffic flow is unclear: it looks as if road traffic will get the run of most of the surface in this area. Other parts of the road will yield enough room for end-on parking, and of course there will be at least one stabling point for Bozza’s jolly good banker bikes. 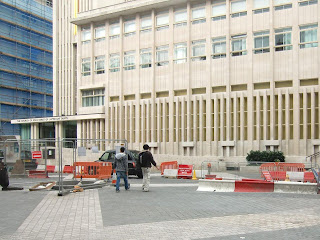 Further south, opposite the Science Museum, work is still going on. When the works have finished, bus services – at present suspended – will return to the road. Pedestrians visiting the museums should have much more space in which to walk, this being a particular problem more or less seven days a week. It will be interesting to see if there is any significant transfer of those visitors away from the pedestrian subway access to South Kensington station.

More information on the Exhibition Road project, including plans, can be seen HERE. I haven’t yet made up my mind on this one – it may come clear when the scheme is completed and bedded in next year.

[UPDATE 2 February: the completed Exhibition Road scheme has been opened by occasional London mayor Alexander Boris de Pfeffel Johnson (article HERE). Bozza, full of guff as usual, has asserted that the scheme will help "kick start the British economy" (might need something a tad bigger to deliver that "kick", methinks).

There have been protests over the cost, and worries over the lack of conventional kerbing. We'll have to see how it goes - I'll try and stop by when next in London and do another post on it]