Passport That Opens Only One Door

Back in the news again, and as usual for the wrong reasons, is Ryanair, the Millwall of air carriers (everybody hates us and we don’t care), over the issue of added fees for card transactions. And, just to put the icing on the cake, Ryanair’s spokesman Stephen McNamara has indulged in a little blatant dishonesty, while presiding over a superbly bad grammar failure.

Ryanair at present charges six notes per passenger per sector for the privilege of paying for a booking using a debit card – the kind of plastic that you can use at Asda or Aldi without any extra charge. The only way to avoid what the carrier jocularly calls an “optional charge” has been to use a pre-paid Mastercard. Having gone through the hassle of buying and loading one, there was no booking fee.

However – and with Ryanair, there’s always a however – this seems not to have satisfied Michael O’Leary’s finest, and so the hoop that punters have to jump through has been made a little less accessible, with the launch of the Ryanair Cash Passport, a pre-paid Mastercard which in future will be the only way of avoiding those 48 quid per family of four return trip incidentals.

Not surprisingly, the travel trade is not happy about this, although Ryanair probably couldn’t give a stuff what they think. The move is held to merely underline that this is imposing booking fees by making it increasingly inconvenient to obtain another piece of plastic and to keep charging it. But while punters continue to tolerate Ryanair’s behaviour, that behaviour will continue.

Which brings us to McNamara and his suitably blatant whopper: in a press release dated today, he proclaims “At Ryanair we don’t want your [add-on] fees”. Of course not, Stephen, and some may believe you. This assertion is clearly dishonest: raking in six quid per sector per passenger when a transaction costs a few pence to process is substantial extra money. No sane businessman would wish that away. 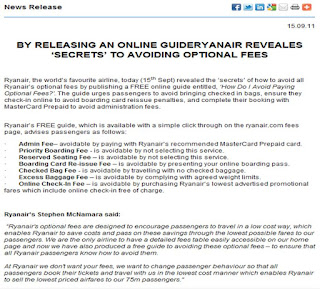 McNamara has trouble smelling his worms

Although, having said that, it might also be thought that no sane businessman would publish a press release containing such shockingly bad grammar and spelling as the one in which McNamara makes his assertion. One look at the banner headline should tell you all you need to know about how cheap and nasty Ryanair’s publicity really is.

I hope to Christ RyanAir never get pressured into accepting payment authentication by retina scan when the eventually phase out chip and PIN.

They'll probably add in an additional security charge if you are unable to counter-verify your payment with the retinal scan of an appropriate parent or guardian. I can easily see them demanding people check in carrying the severed head of long-dead realatives to allow you to travel for the advertised price.