The runaway train that is Phonehackgate rumbles on, with more grilling from the Commons culture Committee yesterday. On occasion, those who should have engaged brain first hold forth on the affair and duly show themselves to be routinely clueless, and today’s prize specimens in this category are Paul Staines and his tame gofer Henry Cole, the Laurel and Hardy of the blogosphere.

Staines and Cole have noticed that a detective in the service of the Met was suspended recently over allegations that information had been leaked to the Guardian. They would have known about this matter by reading, er, the Guardian, which noted: “journalists would no doubt be concerned if conversations between off-the-record sources and reporters came routinely to be regarded as criminal activity”.

That would include, for instance, Essex Police making off-the-record comments about the Chris Huhne speeding points allegations, which they appear to have done to the obedient hackery of the legendarily foul mouthed Paul Dacre, and possibly even with the Fawkes blog. So one might think that Staines and Cole could see the bigger picture on this occasion.

Sadly, this was not to be: when it was revealed – also in the Guardian – that the paper’s reporter Amelia Hill had been questioned under caution – several days ago – over alleged leaks of information from what is now known as Operation Weeting, the less than dynamic duo at the Fawkes blog allowed blinkered tribalism to take over, and laid in to the rotten lefties. 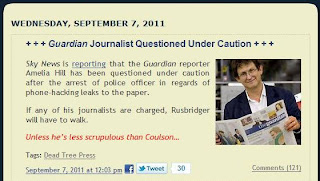 I'm sorry, they haven't a clue

So there had to be an attempt to compare Guardian editor Alan Rusbridger to Andy Coulson. Yeah, right. That’s likening an organisation which doesn’t pay for information to one that paid for blagging, hacking and other illegal procurement of information, has already paid out well north of a million notes to see off claims, and whose editor was central to a record £800k unfair dismissal payout.

And that’s before even considering the Dowler hacking, the potential Soham hacking, any other hacking yet to be revealed, and the small matter of the Screws having been closed down. Just what planet the clueless pair at the Fawkes blog are on is hard to tell.

Because the impression is given that they want off-the-record briefings to be made illegal – they aren’t at present – and so curtail an important and significant information source for journalists. Staines and Cole have ended up looking like two prize turkeys voting for an early Christmas.

[UPDATE: Cristina Odone, not normally associated with anything less than right leaning, has posted her concern at Amelia Hill's questioning. She rightly states "The fact that a journalist can be treated in this way for talking to a source - even a police source - off the record sets a dangerous precedent". The Fawkes blog has not commented further, merely confirming that its authors are blinkered tribalists, ignorant of the basics of journalism, or more likely both]

I think they are a bit miffed that their campaign (allied to Ms Mensch) to ensnare Piers Morgan head on the Hackgate spikes have not yet borne any fruit.