All Hail The Mail Numbers Fail

Some aspects of family life are set in stone in the world projected by the obedient hackery of the legendarily foul mouthed Paul Dacre. One of these is that those families be headed by a married couple: mere cohabitation is frowned upon, and same-sex couples are not, repeat not, normal. At all. Anyone stating otherwise should wash out mouth and consult Bible at once.

So a piece in the Daily Mail today, titled “Conservative UK: Most Britons still oppose gay marriage” is, by the happiest of coincidences, just what the editor ordered. And the headline is backed up by A Government Report. But one sentence gives the game away: “The findings ... suggest ... plans to upgrade civil partnership laws to let gay couples describe themselves as married may prove unpopular”.

Shades of grey in the Daily Mail are a rare sight, so why the hedging? Ah well. The report cited by the article, from the Office of National Statistics (ONS) is genuine enough – it’s the findings that undermine Dacre’s finest in their efforts to paint same-sex relationships as not normal. The numbers can be found in the latest Population Trends release of statistics. 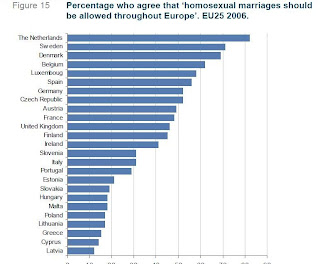 The second item in the table, Civil Partnerships Five Years On, yields the data [.pdf] and the table the Mail piece is referencing is on Page 25, Figure 15. It is titled “Percentage who agree that ‘homosexual marriage should be allowed throughout Europe’” and it should be noted that the data is already five years old. The figure for the UK is just over 45%.

What the Daily Mail does not tell is that there is no figure for those dissenting from the proposition, nor one for those who neither agreed nor disagreed. And without those figures, it is impossible to conclude whether “Most Britons still oppose gay marriage” or not. Moreover, any reliance on five year old data puts that assertion on shaky ground at the outset.

But what the Daily Mail article does tell us is that the paper continues to selectively use information to fit the story to the headline, and so satisfy the Dacre agenda. It was ever thus.