Toby Jug – What’s Not In The Eye

Congratulations are in order to the loathsome Toby Young, another of those inhabiting the bear pit that is Maily Telegraph blogland, for becoming famous enough to have been featured in Private Eye, which he duly has at the foot of Page 21 of Issue 1296.

The spoof advertisement – which is for The Toby Young Jug – is said to be a “Lifelike effigy of our most treasured [speak for yourself, Master Strobes] and lovable reactionary buffoon, Master Toby Young”. 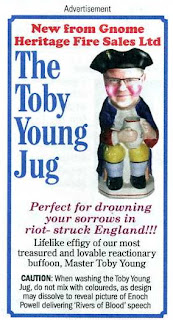 But it is what the Eye does not say which is equally interesting. Given that the Toby Young Jug would be available by mail order, there is scope for adding something about delivery.

And, given Young’s record at the launch of the Huffington Post UK and the Rally Against Debt, those delivery timescales would typically range between “late” and “not at all”.

The latter option is likely to be much favoured by Young’s fellow “free school” governors very soon. Allegedly.