Keep Them Frightened, Keep Them Ignorant

One thought that horrifies hacks and politicians agitating against the EU is that the electorate might become knowledgeable enough to rumble their diet of Europhobia and stop taking them seriously. This has been highlighted superbly – albeit inadvertently – by another piece of sloppy and blatant churnalism from Express political editor Macer Hall. 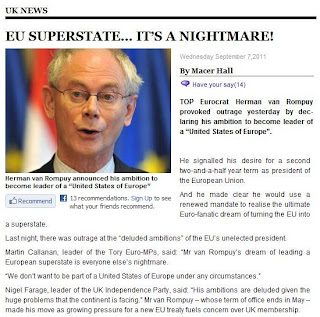 Where did you get that story?

Under the screaming headline “EU Superstate – It’s A Nightmare!”, Hall tells that “Top Eurocrat Herman van Rompuy provoked outrage yesterday”, but he didn’t: the story was lifted from the previous day’s Maily Telegraph. And that piece came from Bruno Waterfield, a name that will be familiar to Zelo Street regulars, given his track record of exaggeration and forthright dishonesty. 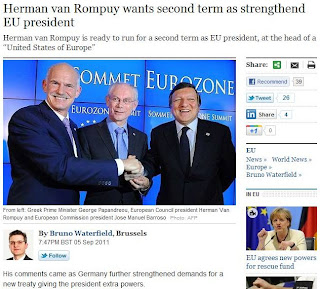 From another paper, that's where!

So no-one should be surprised to know that Waterfield is being less than totally honest in his assertion that van Rompuy “wants second term as strengthened EU President”. What he actually said was “I do not rule out a second mandate”, but that does not chime sufficiently loudly with the Telegraph agenda. And the idea of a Eurozone economic council headed by the EU President is not new news.

In fact, it was reported by the Guardian back on August 22, and even then, the article tells of events “last week”. Note also that the backing for this council comes from France and Germany, but when Waterfield churns the news a fortnight later, the French involvement gets edited out (the Express doesn’t trouble readers with this detail).

But merely to raise the spectre of German domination is not enough for the Telegraph: there has also to be another of those dastardly treaties, like Lisbon, which is, er, the capital of Portugal. Here, Waterfield quotes at length Gerhard Schroeder, former German chancellor, except Schroeder is no longer part of the country’s legislature. He is merely an onlooker, another pundit.

No matter: Telegraph readers, believing the title to be a paper of record, are now on-side, yet blissfully ignorant of the real picture (there are, in fact, other concerns with the moves to form that Eurozone council, as the Guardian article points up, but these would complicate the Telegraph reportage with inconvenient shades of grey).

And the Express, with its dwindling band of hacks re-heating stories from other papers, has an easy piece of knocking copy ready for the microwave, complete with a little ad hoc invention of its own (compare the comments from Tory MEP Martin Callanan in the Telegraph original and the Express churn).

Only tell the readers what you want them to hear: keep them on-side by keeping them ignorant. Especially when the name of the game is the EU.