The Maily Telegraph, no longer a paper of record, is also apparently having problems with remaining a paper of correct grammar – at least, in its web incarnation. Perhaps it’s the Lib Dem conference that has caused the assembled hacks to froth so much that they have taken their eyes off the ball, but whatever the cause, the results are not good. 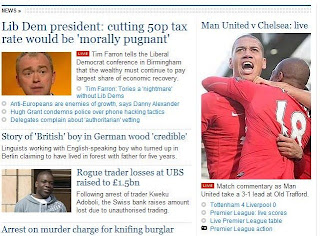 Yesterday, we were told that party president Tim Farron considered any rescinding of the the 50p income tax rate to be “Morally repugnant”. Well, that was what Farron said, but by the time the clearly incandescent Telegraph hack had calmed those trembling fingers, it came out as “Morally pugnant” (my version of Word flags that up as incorrect spelling ... Hmmm, pungent or poignant?).

But by today, the howler had been corrected. It could well have been a one-off, but not so “Nick Clegg hits out a ‘ridiculous’ critics”, which I admit Word didn’t flag up, not even for suspect grammar. 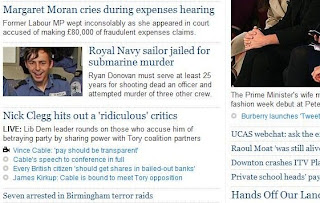 This appeared on the Telegraph homepage, and perhaps the slip is understandable, given that it’s allegedly “live”. 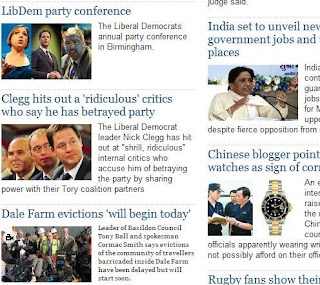 But it’s been replicated to an area that isn’t “live”. And someone must have edited the text to add “who say he has betrayed party”. 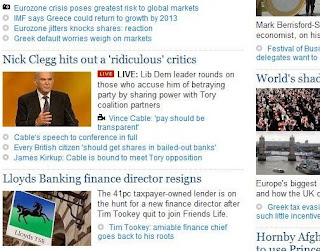 And it’s appeared in another supposedly “live” context, which also looks as if it would have needed editing, given the addition of Vince Cable’s photo.

Remember all the stick that the Guardian used to get for iffy spelling? Many still affectionately refer to the paper as the “Grauniad”. I must put some effort into renaming the Telegraph. Telegaff, perchance?