Today in the ever decreasing circle that is the empire of Richard “Dirty” Desmond, the dwindling band of Express hacks has taken out its dog whistle in order to frighten the equally dwindling band of readers, those poor souls who have paid good money in the belief that they are buying into something factual and original.

And the chosen issue presses all the right buttons: fear, xenophobia, implicit racism, and the safe and sure knowledge that someone is getting more than you when they don’t really deserve it. Under the by-line of Giles Sheldrick (who he?), readers are told “15,000 Romanians Are Chasing Jobs In Britain Each Month”. 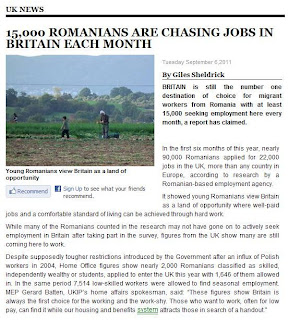 That means they’re coming here. And readers should be scared. Because they’re foreign. And it’s all Brussels’ fault. And if they’re Romanian, that means Gypsies, and they’re, well, Gypsies. And they talk foreign, which means they’re talking about you and you can’t understand it. Like those Welsh people in Porthmadog.

But the Express article’s implication, that 180,000 Romanians are coming annually to the UK, isn’t true: their own figures point this up. The actual figure of those arriving in the past year is just over 9,200, with 7,500 of those only here to find seasonal employment. So just over 1,600 plays 180,000.

Which makes the headline blatantly dishonest: this is like finding that someone applies for 50 jobs in 50 different countries and then counting them as an immigrant to all 50, even if they don’t accept any of the jobs. How many of those 15,000 also apply for jobs in Romania? The Express manages not to tell.

It must be serious, though, as the Express has a quote from UKIP MEP Gerard Batten: “These figures show Britain is always the first choice for the working and the workshy [my emphasis]. Those who want to work, often for low pay, can find it while our housing and benefits system attracts those in search of a handout [ditto]”.

That’s spectacularly dishonest: those who arrive and don’t work, don’t get. But Batten is the ideal pundit for this article: peddling misinformation and bigotry with a supreme air of intolerance. Foreigners are coming, Express readers. Be afraid. Be very afraid. And keep buying your Express every day.